We have some mulberry trees in our back woods area and they are loaded with ripe berries now...Our peeps are not the only ones who like them...
This dude showed up the other day, and us kitties could not see him, only the petcretary and MJF did...but MJF is slowing down on account of his wobblies and deafness. Maybe that is a good thing, cause this trespassing guest was rather big fur MJF to 'take on'.
We all have no idea how that varmint even got into our yard, our fence is five feet above ground and a whole foot underneath as well. Must be an amazing digger Chuck... 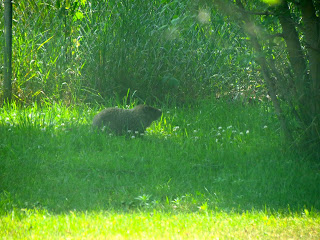 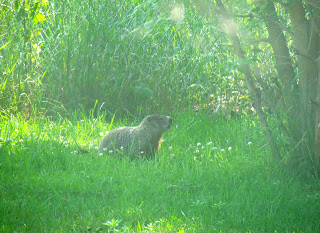 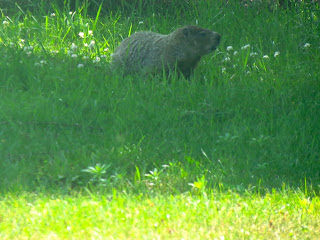 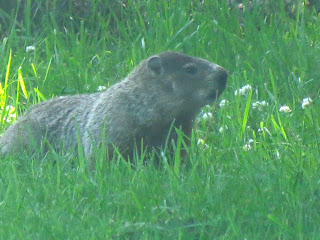 In other news, the petcretary is doing a major save of all the ten profiles on her Dogster/Catster site. Four of them are rather extensive with long diaries and lots of pictures and badges. She does have archived copies made a couple years ago when we all thought we were getting the boot that time...but there was a reprieve. But now we are facing the real deadline.
That is why you may have seen some published blog posts that you can't access, the petcretary was testing them out.
Eventually we may publish them instead of leaving them as drafts. They are large though...so maybe one a week for a while.
That is also why the petcretary has been kind of AWOL in the blogs of all of you our fine pals. We look them over and comment if there is something we need to really say but for the most part we will come and check in later. Also the petcretary is working this weekend.

We hope all is well with you our beloved pals and we hope to be back as usual pretty soon...Purrs and headbonks; licks and wags!