It was Benji's Gotcha Day on the 28th...so yes we are a bit late in posting all about it...but we didn't forget, LOL!

Three years ago, Benji joined our furmily at the age of about 6 months...he was a rescue pup from Texas...who knows how he got to be in Michigan, we think they just pulled lots of pups from crowded shelters there and took them to others...where they would ave a much better chance of finding a new home..and Benji lucked out with us! 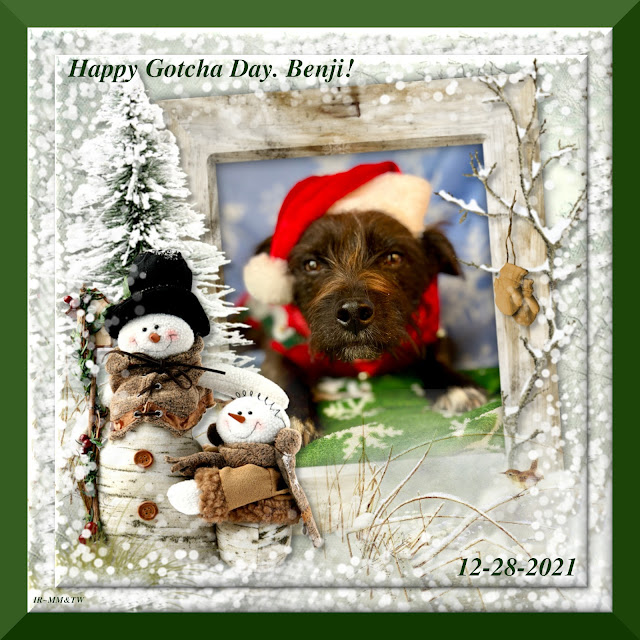 Petcretary didn't have a good chance to make any pics today as she had a lot of errands to get done, since she has been at home over the Christmas weekend and so on...sure, always excuses! When we get them of him with his new Gotcha Day stuffie we will show them:) Wonder how long it will last, BOL! So therefore she kind of cheated and used an image from our Christmas Photo session.

It was a wet and soggy day here, and then the snow machine geared up...and we had snow, sleet and more rain even a bit of the nasty freezing rain. it should be interesting for  the morning commute around here...

And yes, there were some more sads in Blogville...

Galletta, whom we ourselves did not know, left for the catnip meadows of the RB...

Posted by Meezer's Mews & Terrieristical Woofs at 3:23 AM 24 comments:

Its Christmas!! Wow, the big day we waited for SO LONG, well, now its here!

Our unfurbros are here, too...the more the merrier you know:)

Here we are in a snow globe...the weather is not conducive to snow here...more like rain! Blech! 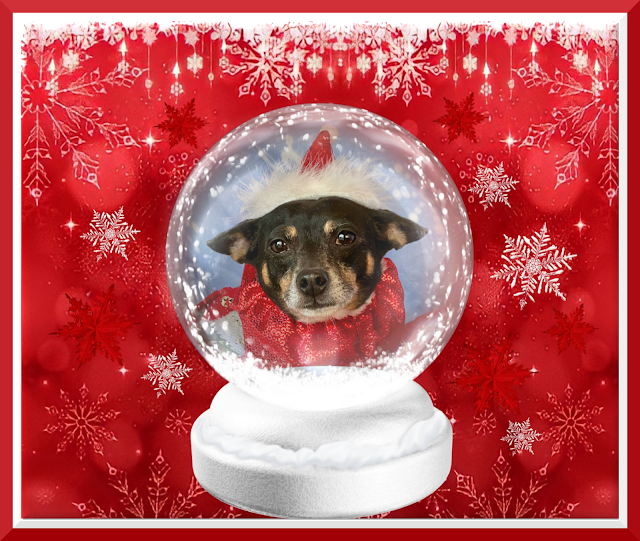 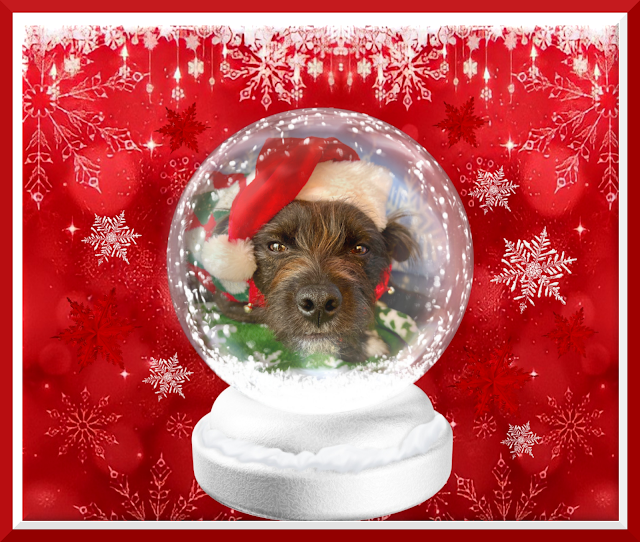 Our cousin Eddie from Canada recently had a birthday and sent us this birthday pic of himself: 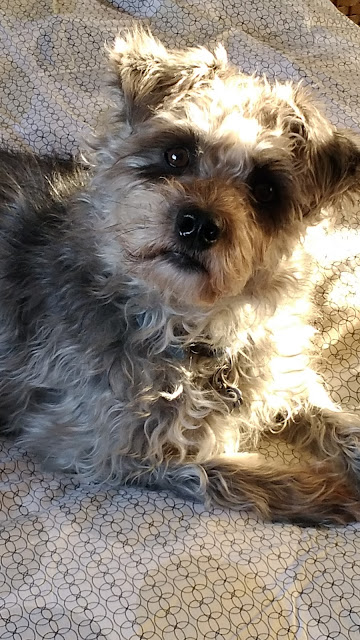 He also sent us another pic, for Christmas... 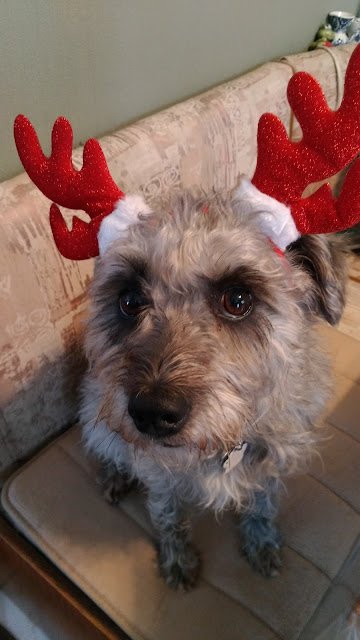 We put him in a snowglobe too: 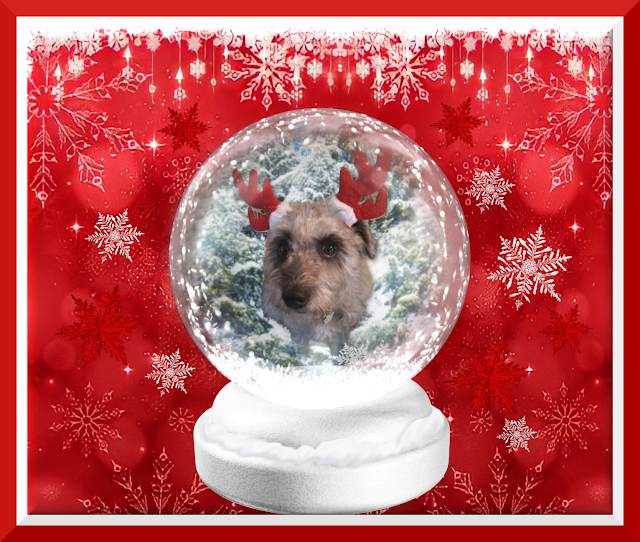 Once again, here is our Official Christmas card to all of you! 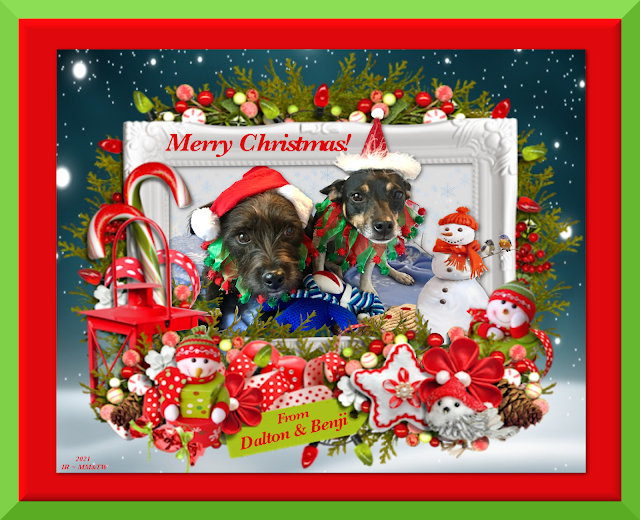 Unfurbro is hobbling around here...he tripped off of a curb and hurt his ankle...Oops. Ouch. Things happen at the most inopportune times!

We had to have the plumber here as an alien team of invaders...in our kitchen and in the cellar, too. Sheesh. They fixed our faucet, but they have to return to fix the problem in the cellar...sheesh, we have to bark so many intruders away lately!

Petcretary won a calendar from Summer at Sparkle Cat. That was a pleasant surprise! Thanks SUmmer, we love seeing you in all those pretty pictures!

Petcretary was a firstie of four in Teddy's Tuesday Teaser...and she was also the first right guesser. It was Bethlehem at Christmastime. How appropriate!

And even though it is Christmas, there are still the many needs of those of our fellow friends and bloggers. Some we know well, and others not so much...

Ollie of the Poupounette, needs surgery to repair a torn ligament...could we all purr and pawyer for him to get through that and recover fully so he can once again run in his fields. And for his #1 and all his furmily and friends as they are so concerned for him right now.


Posted by Meezer's Mews & Terrieristical Woofs at 4:24 AM 11 comments:

In Loving Memory Of Monty

Monty of 'How Sam Sees It', has recently become an Angel Pup.

Getting Closer And Closer To Christmas!

Our week was pretty normal, so we don't have anything exciting to tell you or to woof at you about.

Here are our selfies for this week, next week, it will be the day after Christmas! Wow! 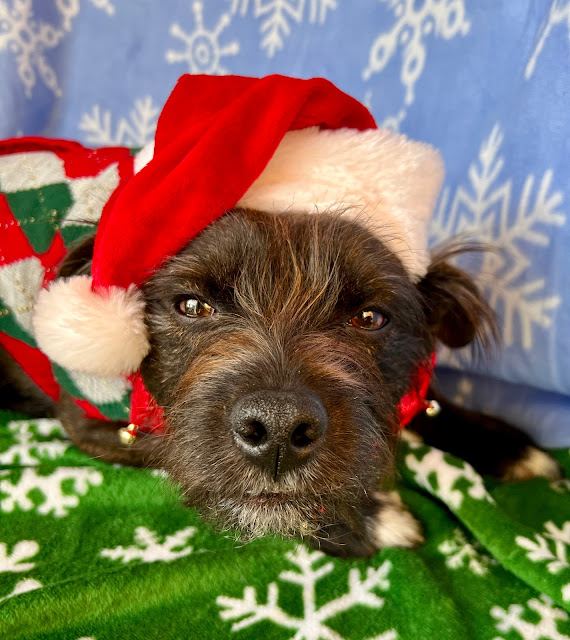 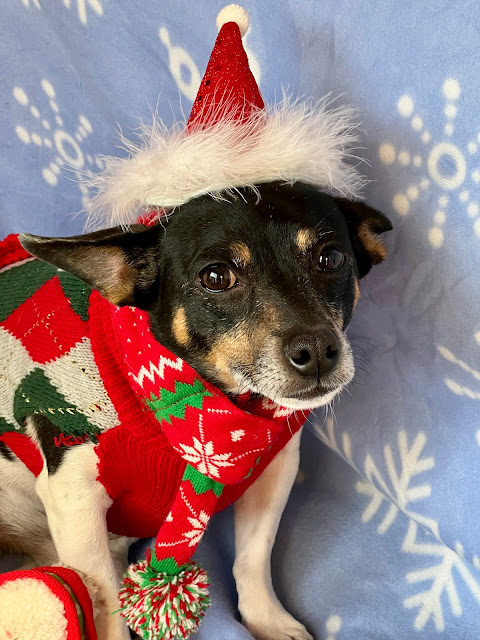 We have lots of snail-mail cards, we thank all who sent them to us! We apologize in advance...we are only sending E-Cards this year...but we still love you all!!


Posted by Meezer's Mews & Terrieristical Woofs at 1:35 AM 20 comments:

Our Official Christmas Card! From Us To YOU!

Feel free to snag this from our blog, if you didn't happen to get one from our emails we sent out on the 9th, which was actually Christmas Card Day! We are only doing E-Cards this year, with a few exceptions, mostly for peeps who have no access to computers or are direct family.

We thank everyone who has sent us cards, (E-cards and snail cards); we love them all and we love you!

Life was trying to be ordinary this week...but nope, lots of less than ordinary stuff, LOL!

Monday during the daytime, Petcretary was making lunch, and there was a squirrel stealing peanuts on the ground under the feeder.

So after a loud 'Squirrel!' from her, we both ran outside...but Dalton is very speedy, and he got there and nearly snagged that young black varmint. Some of them know the sounds the doggy door makes and then they get a head-start at escape, but this one had no clue. He did not even know what to do, he went back and forth, and Dalton actually got within a foot of it, before it put on the jet propulsion and scampered up the tree... 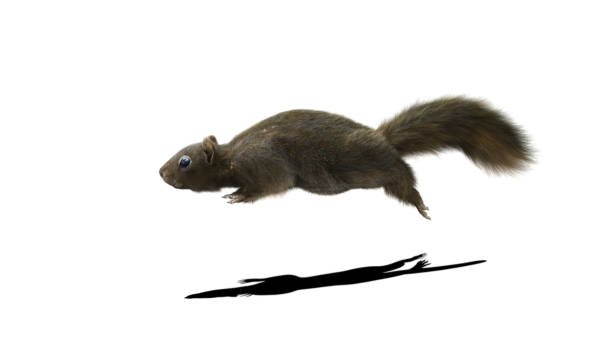 where it sat and scolded him with all kinds of un-publishable wordage such as only an angry squirrel can make!Yes THE tree...its still standing there tall and brave. It has to be, as we had a very windy and stormy night, Friday night. And while the thunder was loud and the rains pounded down, the winds gusted up to around 60MPH. Saturday, there were lots of big branches on the ground, flung far and wide across the whole yard. Thankfully none hit the wires under that tree, or the house. We sure hope the tree dudes will be here sometime this week. In the far back of our yard, a huge limb came down on the fence, so now there are 4 balancing on it...but at least the fence is more or less intact and unscathed. We really need to invest in a chain saw...

Again on that selfsame Monday as the squirrel fun, the day turned nasty in the early evening, with wind, snow and ice. Our pawppy was supposed to be at a meeting in the next town over...so he left early to account for the bad roads. Well, after a while there he was back home. he said it was just too awful out there and the roads were dangerous. Later we saw that there had been multiple slide offs and other driver disasters on that route he would have been on. We are glad he came home safely. We had 2 or 3 inches of snow...that stuck around till Saturday!

Traveling back to Monday yet again...after pawppy got home, suddenly the furnace decided to conk out. Ohh, sheesh, its 16F out there and the weather is very bad...well the repairman came here at 930pm, and of course we barked him good...an invader you know! LOL! He fixed the furnace and after about an hour, he left and pawppy went to bed. Petcretary went to shovel  the sidewalk...and when she got in the furnace once again was not working. OH NO! The man on the help line said he thought it needed a new 'motherboard', aka brain...but he didn't have one in his truck. So he told *her* what to do, and she stayed up all night to restoke the thing over and over again, so that when pawppy got up, he wouldn't freeze and our pipes were safer that way too. They got back here early Tuesday morning, and of course we welcomed them with lots of our good and loud warnings! We got corralled behind the gate so we were not able to sniff the man...or in Dalton's case bite him...yes, they gave the furnace a much needed brain transplant, and voila! It worked! On Friday morning there was regular furnace maintenance scheduled, (Go figure the thing would conk out a few days before that!), so once again us pups were loud and boisterous in our greetings. They left, pawppy went to work, and petcretary went back to her own nest to catch up some more Zzzz'z. All was well when she got up...but...after about 30 minutes there was the error message on our thermostat AGAIN! The man came right back, and we were outside...oops! Well, we actually were well behaved and just let him come in to do his work...and the fix was fast and easy...he had forgotten to turn the gas back on...um...DUH! Well, its been working just fine since THAT!

We also are doing the Blessing Train this year, here is our decorated Box car.

Maybe we should have put a squirrel dude on the top...And a furnace!! BOL!

Here are our 'ordinary' selfies:

Asking for forgiveness... to those of you for whom I sent E-Cards and you received them...well, I was not paying attention, and I C/P'd the whole list if recipients into thhe wrong box, so you all got a huge carbon copy...oops:(    (Bad for security issues...)

And I got some sent back to me, on account of there was no subject line. Sheesh, us pups will have to make sure she proof reads her send-outs! Sorry about the messes I cause sometimes. I am a techie klutz!

We are hopping with all the other Sunday Selfie Hoppers,  at The Cat On My Head.Click on this link to join up, too! Its fun, and a great way to make new furends! Thanks for hosting each week, Kitties Blue!

Posted by Meezer's Mews & Terrieristical Woofs at 12:10 AM 22 comments:

Wolfie from Fivesibes, has left to go play in endless snow drifts inn the northern parts of the Rainbow Bridge. He now feels much healthier and he got to play with all his furblings who had been living there already.

Posted by Meezer's Mews & Terrieristical Woofs at 12:11 AM 8 comments: