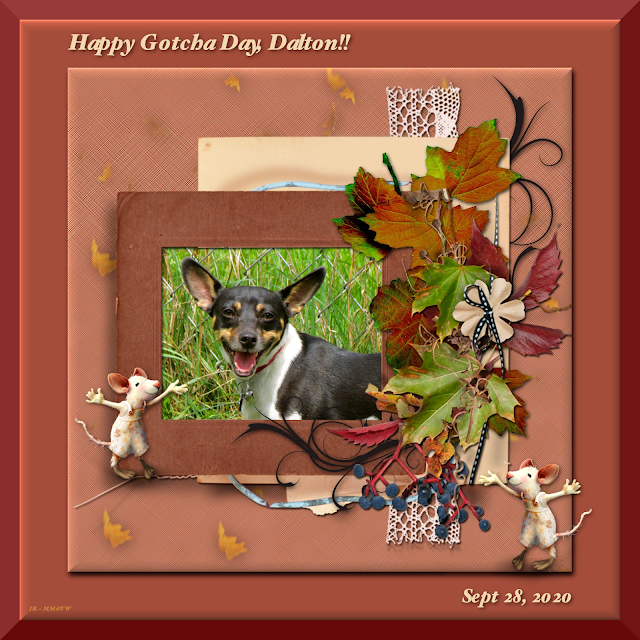 Today is Dalton's Third Gotcha Day, he came to our furmily on this date in 2017, a rescue from Texas at the time of Hurricane Harvey. He was about a year old then...he has come a long way since the scared wee pup that he was...though he still has issues, we have not given up, he is a fun pup and has learned some 'tricks' and other things, which all combined have made him less fearful and a lot more self confidant.

So we celebrate Dalton today.and we will join the Sunday Selfies at the same time, even though we are here on a Monday, BOL!

We will all try to be here again next time...

Petcretary was a first commenter last Tuesday at Two Spoiled Cats, so she got this badge:

We missed Pirate Day...Yarghh! So now we 'ave t' be satisfied wit' our semi Talk Like A Pirate Day, cause Petcretary was at busy wit' more nah cur or kitty stuff...Yargghhhh!...We be nah too jovial about missin' that fun day, but here we be anyways! AHOY! 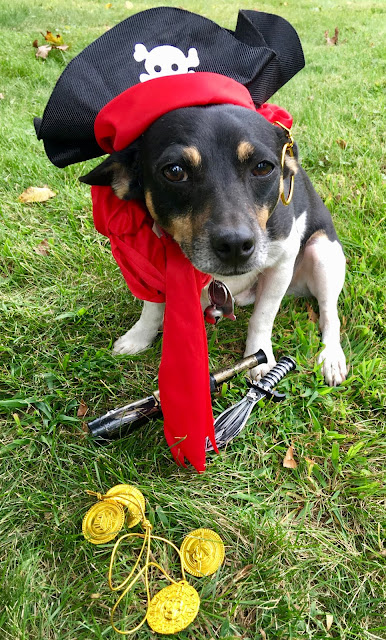 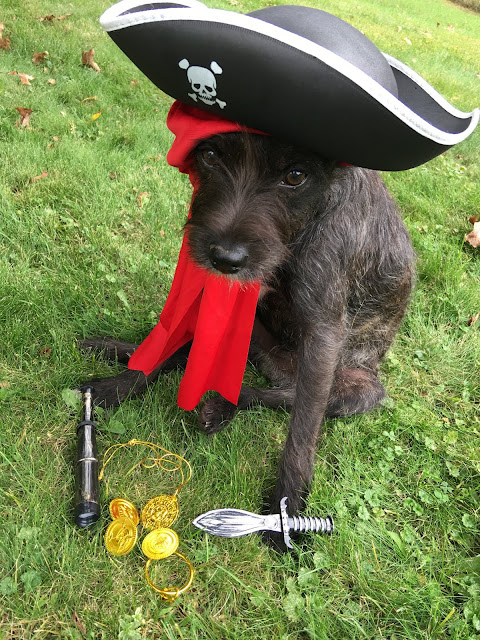 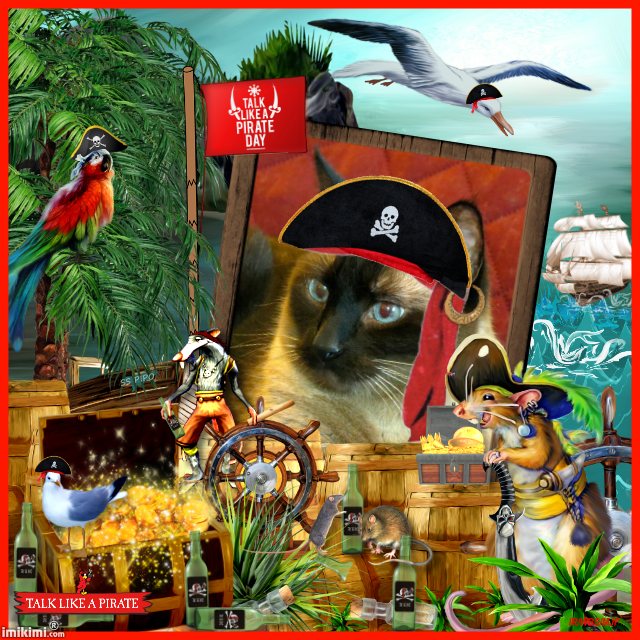 Ahoy Mateys!!
Guess wha'?
*She* got some new pics so'as we can 'ave fresh Talk Like A Pirate Selfies, even if we be late. Whoot!
We reckon we shall haul in th' plank t' use some other time...Maybe we be nah that ferocious afterall...BOL/MOL!  Yargghh! 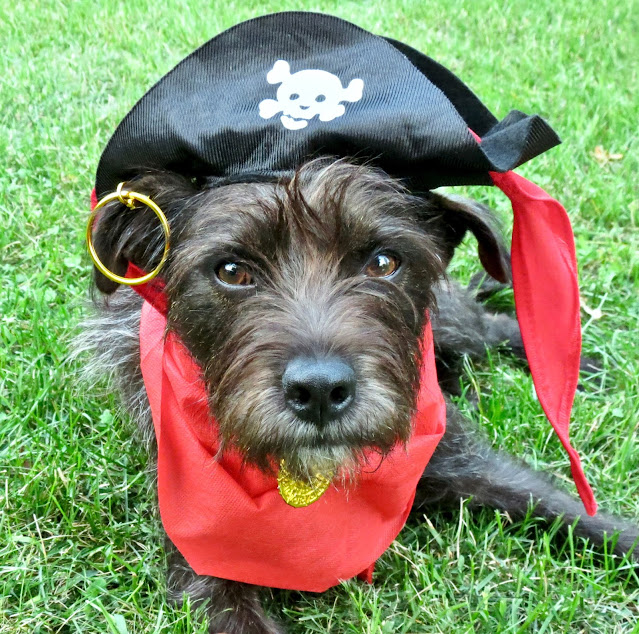 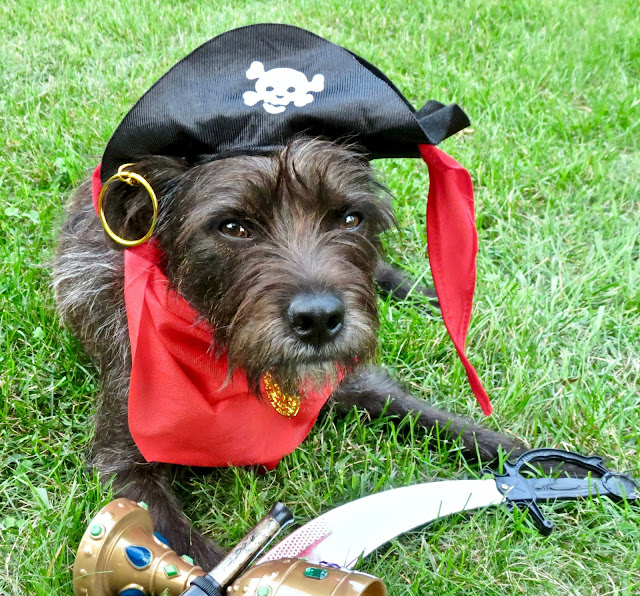 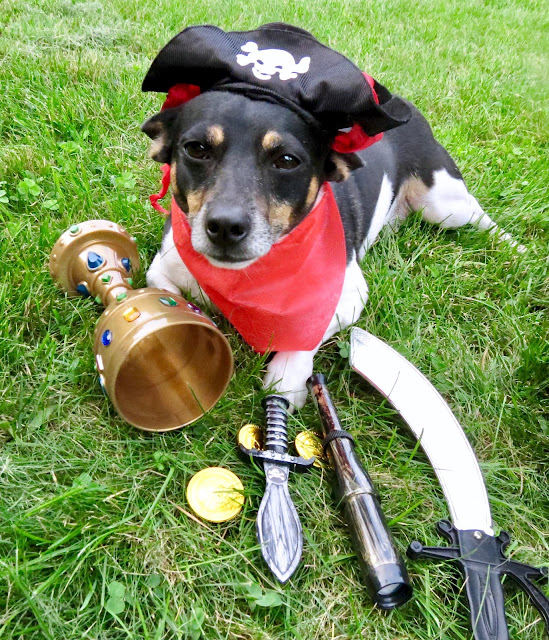 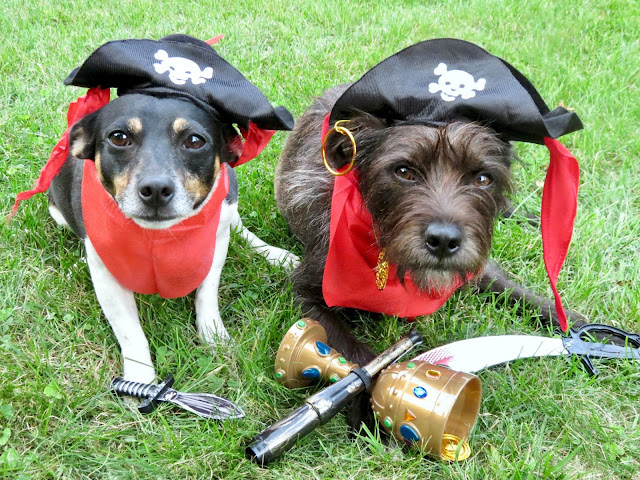 In not pirate stuff, Pawppy is slowly getting better...he walks better and feels generally a lot better than a month ago. But still not 100%,,, but we are getting there. Thanks for all the pawyers, and purrs and POTP on his behalf.
Pipo is having 'cat attract' on his litter...but he still piddles a lot on those pads....at least we DO have that option...
Arrrrggggghhhhhhh!!!
This new blogger (and the new Word Press) even in the 'classic' versions are driving petcretary NUTS.
She took hours just to get our post up and running. Hisses and Grrrs...and lets make them walk the plank.
Arrrggghhhhhh!!!!!

Flashback To Our Earliest Day Of Sunday Selfies

Yup, another week with flashbacks. Petcretary is working, and she has lots more added to her plate since pawppy has been 'out of commission' with his back issues.

Pawppy still needs his cane, he is complaining of leg weakness now, although the pain is still there, it s not constant. But it does flare up when he least expects it. PT is baffled at his symptoms, so the head PT guy will do some more extensive evaluations next time he goes.

Petcretary thought she had Pipo all happy with the new litterbox arrangements, (a huge crate with a hole in it, lined with pee-pee pads, and a good sized hole as the entryway...and plenty of floor protection all around for just in case). Well things were great for about three days, then last night and again this morning, Mr Pipo went on the mats outside the box...again...sigh...not sure why. At least it was on the waterproof mats, and not the carpet. We cannot put the box in the bathroom  nor the kitchen, because those are in the 'dog zone'...don't need to add to his stress...so its in the front room, which is pawppy's home office. Strangely enough, he does go in there to do his #2's and some pee-pee's. He is another mystery!

Benji still has bouts of runny doo-doo's...and sometimes he eats and sometimes he doesn't. Will check in with the vet about that when all the furs go in for their checkups.

Dalton?? Well he loves to lick out the empty containers of the food that Benji gets if he will not eat in a particular day. He hovers near by when Benji eats in case there are tidbits dropped on the floor for him to scavenge, BOL! He still hates that thunking cane that pawppy uses...In a couple of weeks Dalton will be dogabrating his third gotcha day:)

And they are both having a ball digging...sheesh. We keep the company that makes red pepper flakes and cayenne pepper powder in business, BOL! Juast as effective as the commercial 'keep away' products, less costly, so we are all for that, still at the prices she does pay, it adds up. Phooey! Pawppy jokingly said, next time you see a picture of a cute pup in 'The Shopper', ignore it! BOL!

So here are our flashbacks...Mr Jack Freckles, now an angel, is showing off his first attempts at selfies...from Sept 2014.

Pipo was not thrilled to make his first official selfie...Sept 2014 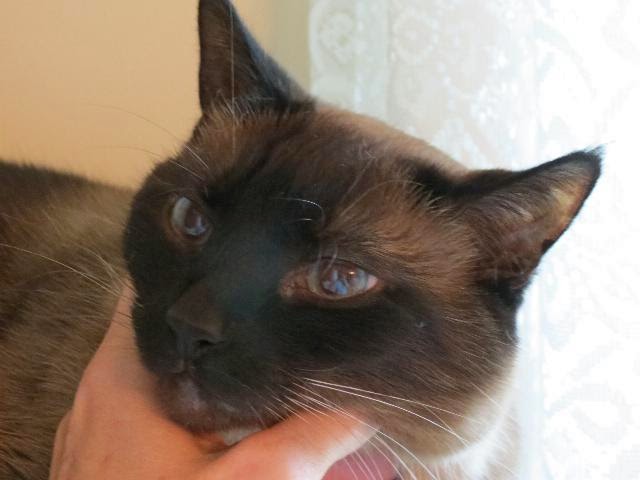 Sorry for the bad lighting...these were the first selfies we did when we started to join up with the weekly Sunday Selfies, over at The Kitties Blue. Wow it has been 6 years already! Thank you Miss Janet, for faithfully keeping up with this fun weekly feature!

We had to say goodbye to these two beloved kitties recently. There are others, too, so sad; we did not know them. Our condolences and love go to all those hurting furmilies.

Posted by Meezer's Mews & Terrieristical Woofs at 1:21 AM 26 comments:

Petcretary has had a busy week...lots of not doggy or kitty things happening, not to mention her work, etc.

Pawppy is very slowly improving, PT helped him sort through his exercise routine and that has had some good results. However mornings are still horribly tedious and painful for him. He goes to work for half days in the afternoons.

Pipo finally is using the litterbox again...but...well, ,lets just say his style requires piddle pads outside the box with very high walls to catch the spray, MOL! So *she*  bought a huge crate/container, and cut a kitty sized hole in it, for a door, and put the new pan inside of it, lining the area with piddle pads tp catch the spillover. But Pipo stands in it, with derriere facing the door and lets it spray. He doesn't squat to pee, he never has...not even as a kitten. For years the top entry box was the best and working solution to that issue, but his old joints were not able to handle that type anymore. (He does get meds for that problem...) So *she* thinks a larger crate with more space between the box and the door might solve the remaining issue. We hope! Kitty pee stinks! MOL!

Benji still seems to have some issues with the runny poos, and not eating...but sometimes he gobbles up the whole bowlful. Nothing wrong with his digging efforts though...he carved out some trenches yesterday and this morning...and presented us with another big fat mole. UGH! BOL! Sheesh, those moles are naughty of their own accord, but Benji's efforts are far worse! Sheesh. Anyone need some trenches dug out?? BOL! We are using red pepper flakes and cayenne pepper powder combined with garlic and cinnamon with mixed results. If he thinks the prey is *there* he will ignore the smells and tastes of the deterrent and dig anyways...sigh...stubborn terrier that he is...

Dalton has learned a few small tricks such as jump over and crawl through, and jump in to the lap. Each step increases his confidence...but it is VERY slow going...While Benji learns things quickly Dalton has to handled with very soft gloves and teaching with no touch is way better for him, else he pees floods of fear. *She* wants to teach him to roll over, but that has to be done outside...for obvious reasons, BOL!

Well, here are our selfies as culled from Labor Day weekend from 2019...because there were no new pics made this week... 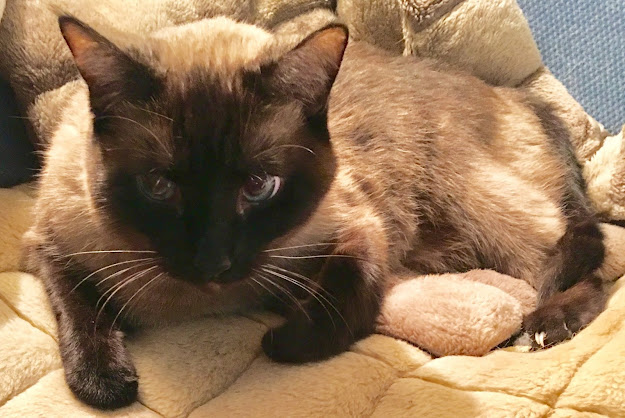 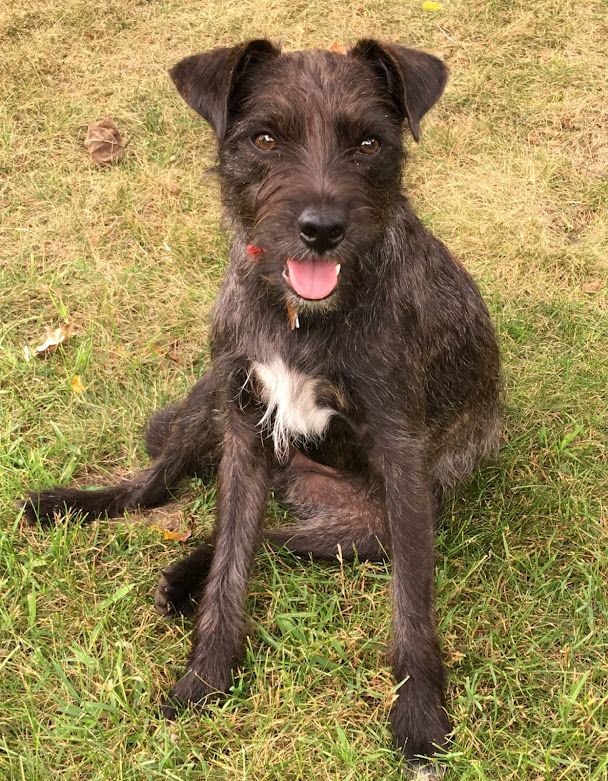 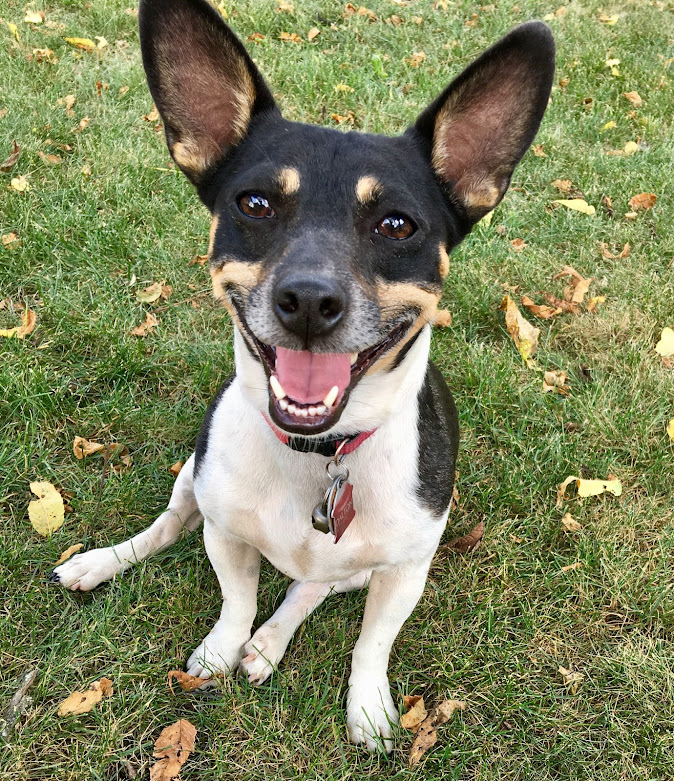 Earlier this week, we heard the sad news that Polar Bear from 15&Meowing had to become an Angel Kitty...

Posted by Meezer's Mews & Terrieristical Woofs at 12:23 AM 13 comments:

This has become a monthly feature (First Wednesday of the month), hosted by The Canadian Cats and the Weimie Twins, DaPhenny and DaNelly.

Here is a yummy recipe, that bakes up all on one sheet pan, which makes for a quick clean up! Add a salad and some whole grain rolls and you're done! (We omit the rolls...or any other high carb or grain based side..., this way it remains Paleo or even Keto.)

We sub in salmon a lot of the times we use this recipe, and it is GOOD!

Ingredients (For two servings, can adjust for more)

So there you have it...dinner bells are ringing! We last made this for the younger son's birthday dinner. We added a mango slaw, keto crackers (Baked beforehand), and a keto cheesecake with raspberries, My ~ we were stuffed!!

Posted by Meezer's Mews & Terrieristical Woofs at 12:46 AM 12 comments: