Petcretary gave us a break today, so we are going to have some 'reruns', aka flashbacks.

She has been running around like a chicken without a head, as she puts it...and she didn't even take any pics at all! Our cherry tree survived the heavy frosts we had and the snow, but now almost all the blossoms are gone, and we have the leaves coming out. Soon our little dogwood should be blooming, but its not nearly as spectacular as the weeping cherry tree. Our bleeding hearts have quite a bit of frost damage, but maybe if it stays warm enough they might send out more shoots.

We had several nights  of temps around 25F,  and we even had snow one night! Sheesh...the weather is strange!

Us pups have plenty to bark at lately, too. Our neighbor man who was gone for just over a year, doing National Guard duty, (Thank You!), has returned from active duty and now he's outside a lot, chopping wood and messing around with his new truck...petcretary hopes we get used to seeing him there,and also his buddies that come to help. Cause we bark too much! But hey, there is a cat that follows him around, and also a doggy...and two mini humans.

These 'selfies' are some flashbacks to 'show off' for some of the challenges that Marjorie Dawson has in her blog/website.

It was a fun day, this past Tuesday when petcretary 'played' the Tuesday Teaser Day at One Spoiled Cat, with professor Teddy and his Mom Pam...

We were one of the first commenters, Hooray!

Then after what seemed to be a totally impossible picture to figure out its location, petcretary hunkered down after her dinner (ie: brain sustenance), and finally was able to put in her (corrected) guess...late but still valid!! Hooray!

So she was first on both counts yet again...three weeks in a row! Triple crown at Teddy's!! Yippee! LOL!

We all in the land of Blogville, had to say our goodbyes to yet another kitty friend; Charles, from Cat Scouts. We didn't know him that well, but we know that many others did and loved him so much, esp, Lisbeth from The Kitties Blue. Our sympathy to all who knew him, he will be sorely missed. We made a card in his honor...we don't think he had a blog, but he was here on Facebook.

Its time for showing off our selfies once again! 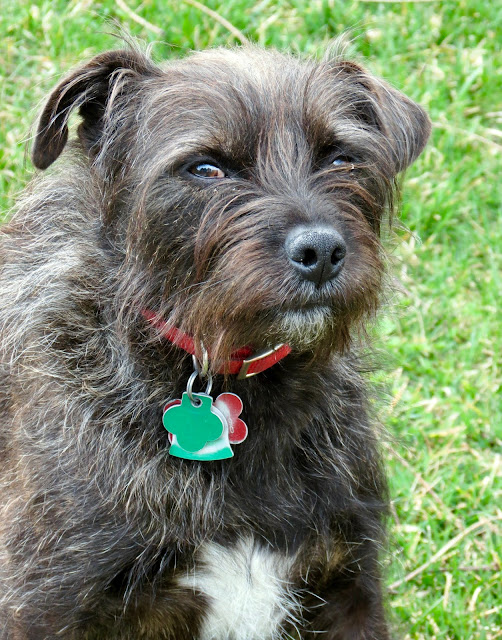 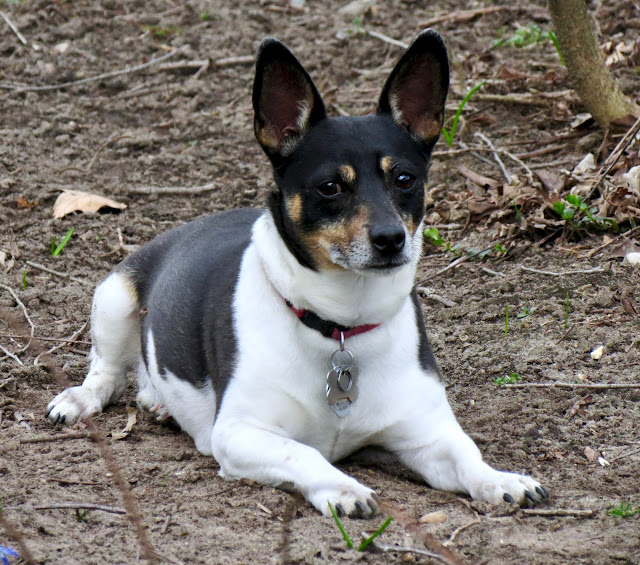 We had blustery chilly weather on Saturday, and it tried to rain a few times, too, even while the sun was shining...so we got a pretty rainbow! 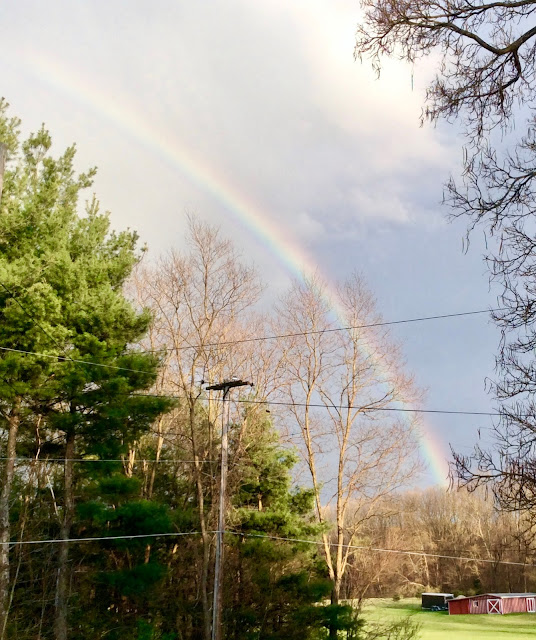 Petcretary woke up early enough this past Tuesday to be one of two first commenters at Teddy's Tuesday Teaser Game.

The picture they had to search the location of was kind of a toughie, in that it made one think it might be not actually where it was! LOL! But *she* found a clue, as dropped by another blog commenter, and she used that to narrow down her search criteria. Bingo! She had it!

So two weeks in a row, she was a double firstie! Whoot!!

Here is the picture she had to hunt:

And here is the badge she got yet again! She doesn't think she'll be able to score this way a third time...that would be unprecedented!

We are hopping along with many other selfie takers at The Kitties Blue, who kindly host this weekly feature. Its fun and we love it! We love them too:) And we thank them for all their work to get this up and running each week, how pawsome is that?!

Posted by Meezer's Mews & Terrieristical Woofs at 12:21 AM 16 comments:

Yup, Spring has sprung here for sure. We are getting some of those so called April Showers, but the sun comes out to brighten things up, too.

We showed you our pretty blooms in our post for Marg's Birthday...so we really don't have any new ones, BOL!

So here we are, just ourselves enjoying a fine bright moment in the spring sunshine:

Its a good thing we have all those pretty spring flower pictures...because on Saturday afternoon the wind came up, and it started to storm. And petcretary came home in pouring rain...and more is in the forecast. That tree will loose a lot of its glory, but we will not grumble (Too loudly), cause its been very dry and everything needs a good drink. But the grass and the walkway is becoming covered in all the petals the wind and rains knocked off. We don't think that tree has ever held on to its pretty blooms for longer than a week...

Petcretary managed to be awake on time to be the first (and only) commenter on Teddy's Tuesday Teaser this past week. Then after some careful 'hunting and snooping', she was also the first one to have the right answer!! Oh, MY!  A Double Firstie!! So she got this badge:

On a more serious note, many of you know Stunning Keisha. Her mom...aka TW...also known as Pattie, is very ill and needs our support and prayers. You can use this 'badge' and if you haven't gone over there, please visit her, love and support are very wonderful things when you are sick. (Petcretary knows that herself, too well...but that is not why we are here today...)

A lot of you (former Dogster) peeps remember the fun loving, if crazy Zaidie.

Our MJF was a good  friend of his...and Zaidie was one of the first pups to befriend MJF on Dogster, way back in 2009...sheesh, that was eons ago. Petcretary must be ancient... Zaidie flew away to the RB recently, so we helped petcretary make a memorial card in his honor: 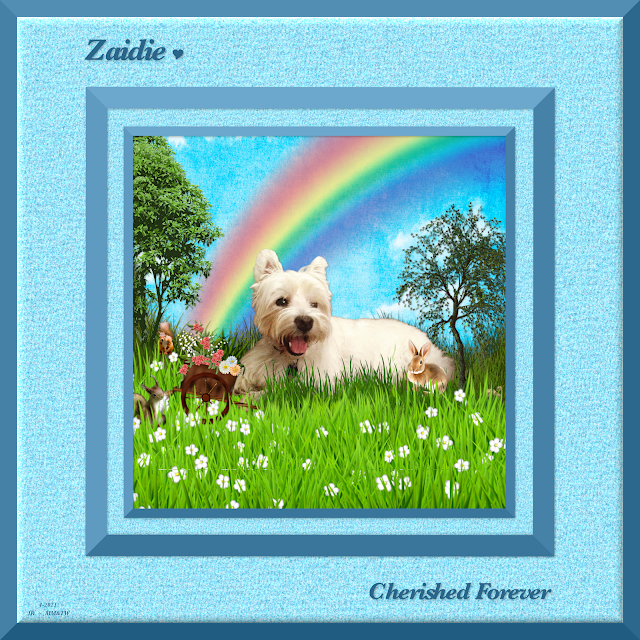 You can visit Zaidie's family over on FB, as he didn't have a current blog.

We are once again in the famous Sunday Selfies! My how we look forward to this every week, and we do thank Miss Janet for her hard work to get this hop going each week, for a long time already!

Posted by Meezer's Mews & Terrieristical Woofs at 3:14 AM 17 comments:

We have lots of new spring blooms to share with you and specifically, Marg, from Marg's Animals, who is celebrating her birthday, today, April 9th!

Happy Birthday Marg!! You are a very special lady, and you are much loved.

We made you a card to get things going here...then we'll show you some of the pretty things we have seen coming up in our yard the past few days when it warmed up! And had a nice drink of rain to help things along:) 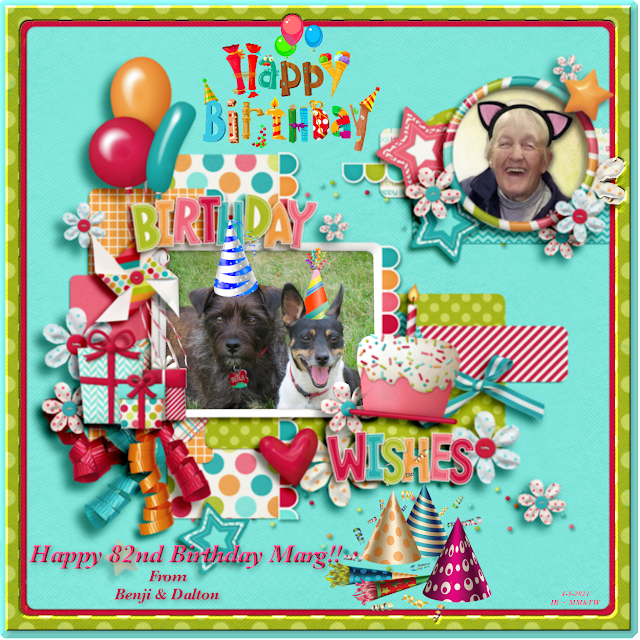 Lets show off our pretty flowers we found for you, Marg:

We also have a large weeping cherry tree, its so beautiful when it puts on its springtime finery each year. A few days ago it still had only tightly sealed buds, and then the weather got warm, so those buds began to open up...and for your birthday our tree decided to show off its full glory! 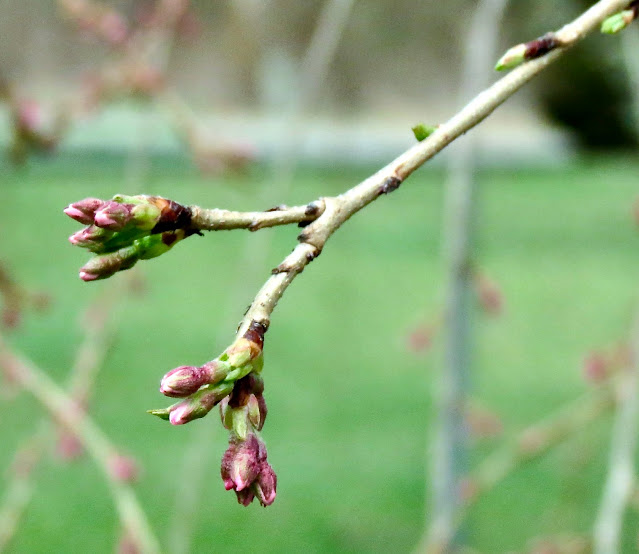 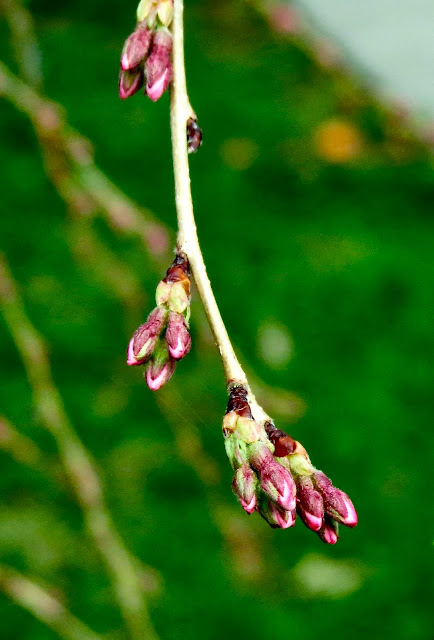 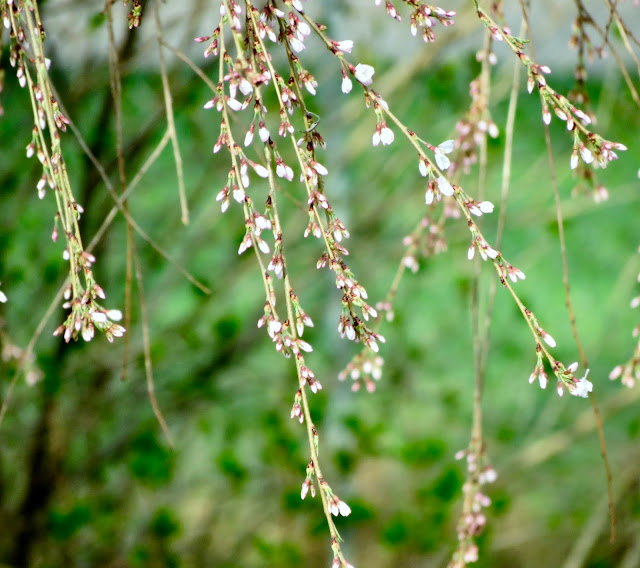 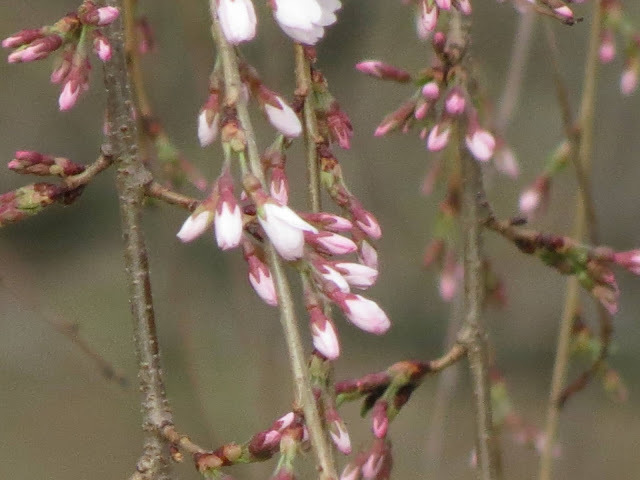 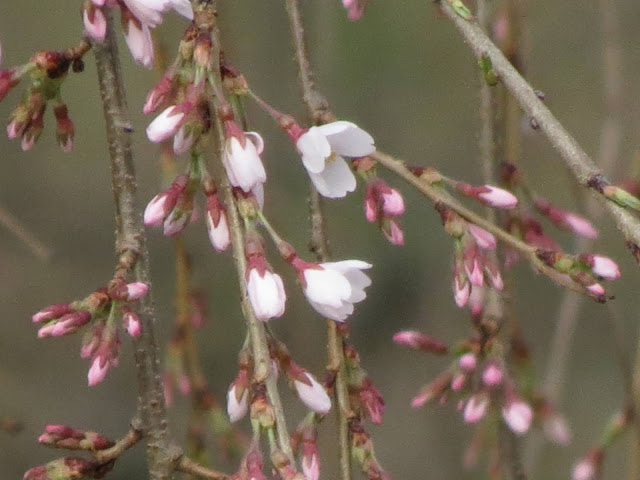 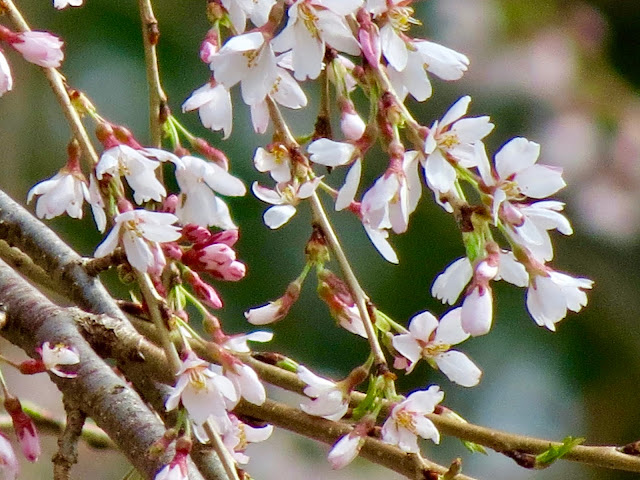 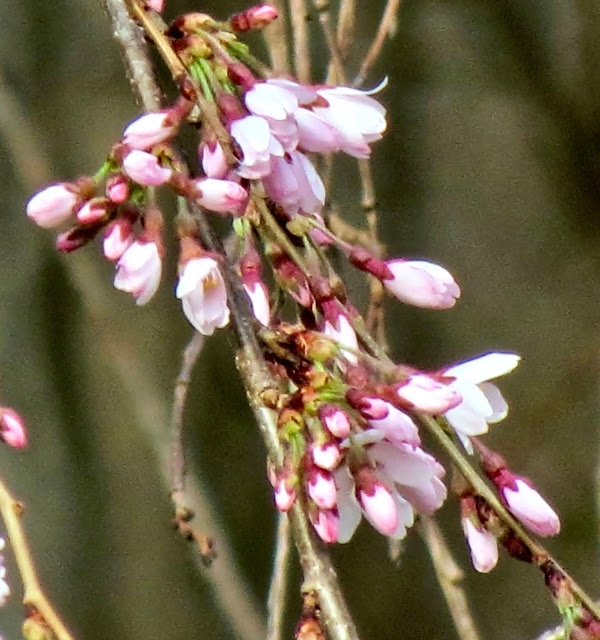 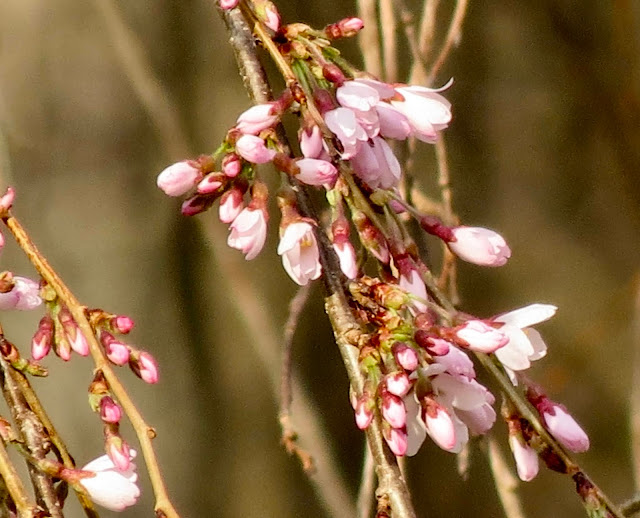 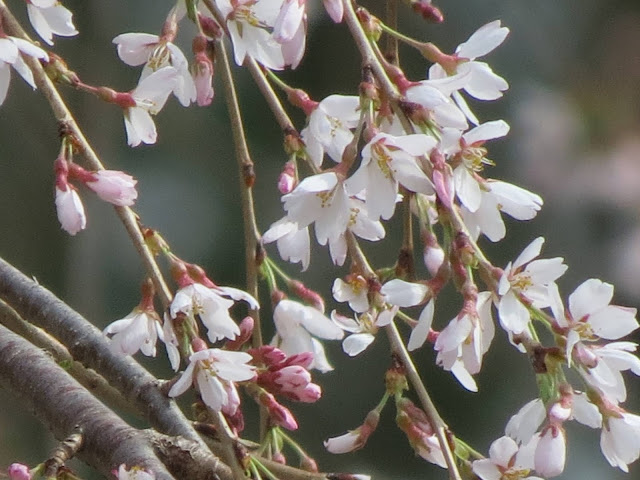 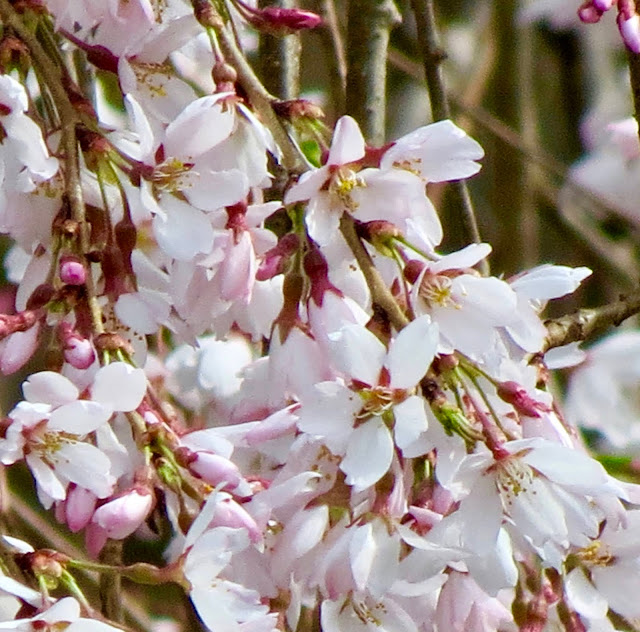 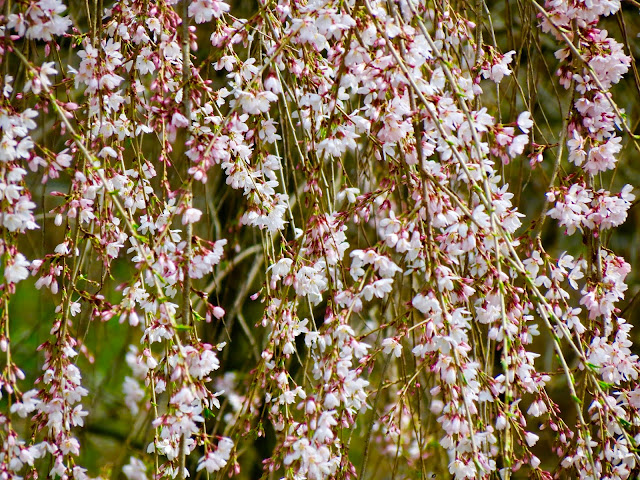 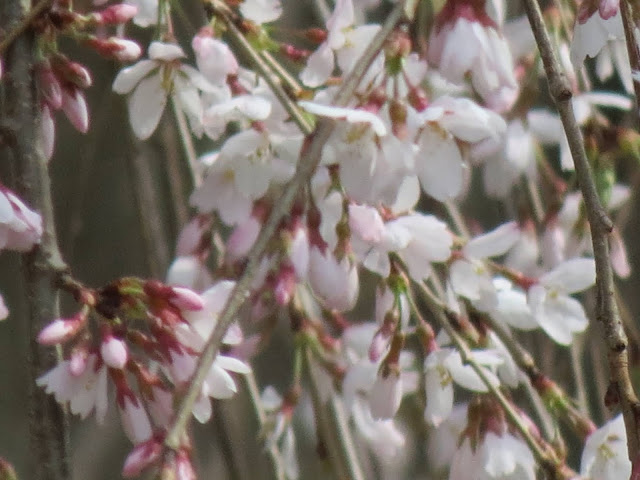 If you’d like to wish Marg happy birthday as well, you can do so by leaving a comment at zoolatry.blogspot.com.

Posted by Meezer's Mews & Terrieristical Woofs at 4:53 AM 17 comments: