Sharing Our Angel Furblings And Selfies, Too

Today is Rainbow Bridge Remembrance Day. That is to say we are remembering all of our angel furblings, no matter when they graduated to the Heavenly realms.

So we are also featuring them as selfies. All four of them.
We also send our hugs and purrs and licks to all those furmilies who are sad as they remember their angel furs too. We know there are many who have recently had losses, though this does not mean that the ones who became angel long ago are any less remembered. We nevfur furget any of them and they all live on in our hearts, to be cherished, treasured and loved forevfur.


This is Simba. Second kitty in this furmily, but the furst to become an angel...

This is Toki. He was such a clown. He adopted dog-guy as his own, MOL!He was the fourth kitty to join our clan...and the second to become an angel.

We had our own Groucho featured on Aug 26th, as that was his RB Day specifically. Furst kitty in this clan of six,and the furst kitty evfur fur the petcretary. Pawppy had 3 kitties before he met her...

And then...well, then there was Suki. A one of kind princess-diva, MOL! She thought she was the only kitty to matter, PMC! And she had a smacky paw fur kittens and pups alike,  tee-hee. She knew Groucho too, and met dog-guy, but was not at all impressed with that pup. She tried to boss Toki to no avail, and later she had nothing but hisses for Pipo & Minko. In fact she even shunned the petcretary for a while after those two young-uns came into our den, MOL!

Well, there you have our angels, thanks for stopping by today. We send purr, licks and hugs to all furmilies with precious angels to remember and treasure.

Now here we are, at least the kitty contingent:
(The pinkish tinge is the reflection off the petcretary's three flags which all have a lot of red in them, esp the Canadian Flag, MOL!)

MrJackFreckles spent some time outside, the weather was mostly nice after a lot of heavy rain this week...seems like we either have too much of that commodity or not enough! 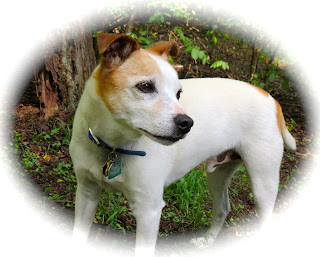 He also is the official Dirty Duds Digger in the Smoke & Joe Campaign, 2016, here is his badge:


He digs up any dirty laundry of candidates, to make sure it all stays good and clean, BOL! Howevfur he is sure that Smoke & Joe will not have much dirty duds to expose...they are too sweet fur that kind of thing:)

We hope you all have a great week! Next Sunday is the middle of Labor Day Weekend...the last weekend that marks the end of 'summertime' vacation. Wow, this summer went by so fast! The petcretary not only has to work that weekend as her regular schedule, but she has to work the holiday, too as it is 'her turn'. Oh well, it means some extra $$ so maybe she will buy us some good stuff, BOL/MOL!

This is the day we remember that the petcretary's furst ever kitty graduated to the heavenly realms and became a sweet angel kitty.
Groucho came to our furmily as an adult, he was given up by his furst furmily who had to let him go due to the many health concerns of newborn twins who were coming home on respirators...poor dude, he was so scared of us for several days before eventually warming up. He was also the big loving brother of three other (also now angel) kittens, when they came to live with us and he outlived two of them....(Simba and Toki; only Suki lived after he left us.)

Tundra from Catster and her furmily made this beautiful memento for the petcretary. Thanks so much!
Posted by Meezer's Mews & Terrieristical Woofs at 2:08 PM 14 comments:

It was quite stormy here yesterday, buckets of rain and thunderstorms and even tornadoes north of here. Scary. We are all fine, and unscathed, but north of here there is lots of damage and power outages.
We hope and pawray thay all our furends are OK after all this unsettled weather, storms and floods and tornadoes, and now even a tropical storm. Yikes:(
Before the rain started, the petcretary managed to find some time to help us make selfies.

Sorry we have been still  a bit MIA for most of you,we are trying to catch up in bits and pieces as it were...
And we won't be here too much tomorrow either, unfurbro-the-younger celebrated two dozen years, and we are going to his place to celebrate with him, well, the peeps are while we manage the household for them, OMC/OMD!!

So here are those selfies: 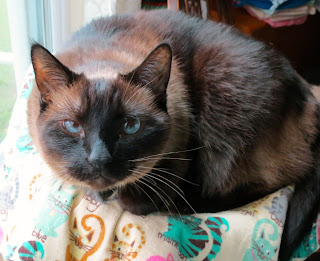 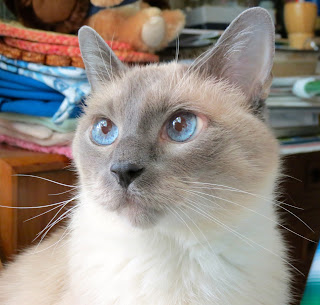 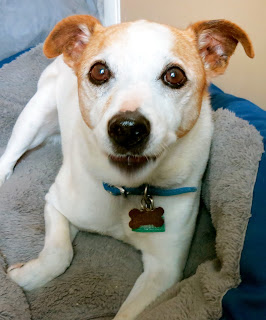 We are going to join the blog hop for selfies no matter how busy the petcretary is. We have pestered her all day to get at it, MOL! BOL!

Somehow she can't even find the time to keep up with all the many blogs. Right now there seem to be about 200 unread ones, yikes! She did answer a bunch in succession, but she'll never get done that way. This past week, evfurry time she had a day off, she had appointments, lunch with friends and a million and one errands. Saturday her and pawppy were gone all day long, they helped unfurbro-the-younger move from his schooldays apartment, where he had been for about 4 or 5 years, from his undergraduate days till completing his Master's Degree. (He moved to another city, where his new job is, about 70miles from the old apt.) So another day of no blogs.
Today she got up at 630am, and after getting ready and doing some dinner preps they left for church, got back ate dinner, and after a couple hours they left again. Got back about 8 pm and then after supper there sure isn't a ton of time left for blogs either...sigh...it has nothing to do with saving our pages that task is long done, at least.
We missed some things like special days and such...pawlease furgive us. And we have not furgotten any of you we are just slowpokes, well the petcretary is.
She has to spend time outside watering all of the patio pots too. And her job, and other household chores...at least she finds the time to feed all of us, MOL/BOL!

Anypaws, eventually she will read the blogs, and comment on the newest ones, to sort of get a fresh start. So there might be some random comments here and there before we get to the newest ones is the petcretary thinks a comment is needed.

Pawlease bear with us in the meantime.

Oh yes, we got a lot of rain on Friday night. About 1 3/4 inches! But some peeps had way more, and even there were flood warnings for some areas in our state. We can say the rain came just in time before everything was shriveled up. Now the grass is mostly green again...um...sheesh, now we have to do the lawn mowing chores too...tee-hee. No rest for the wicked... Is the petcretary wicked?? We think not, MOL/BOL!


We hope that eventually there will be better selfies!

Well, there would be if the petcretary helped us dig out some old ones to recycle!!

Posted by Meezer's Mews & Terrieristical Woofs at 1:37 AM 14 comments:

Yes we are late, and not only that; the camera has not been seen too much around here either...though we don't really grumble too loudly about that, MOL/BOL!
The petcretary has been running here and there doing chores and errands, tending the patio garden, going to her work and trying to keep up with all the blogs and stuff like that. Not good excuses but whatevfur, we are now here with some selfies. Phew!
Speaking of phew, it was pleasant weather over the weekend, but now we are steadily getting hot and hotter...mid nineties predicted, OMC:(
How the petcretary hates hot weather.
And we are going to be doing house guard duty on Saturday as that is 'moving day' for unfurbro-the-younger, from his 'school days' apartment into his new 'working man' apartment about 70 miles distant.  That means the petcretary's van will be commissioned for this task. When the back seats are folded down there is a whole lot of room for transporting the worldly goods of a young man. It just had to be a hot day...sigh...something about blood sweat and tears...
Which means once again we likely will be late with our selfies or we might resort to a repeat, tee hee.

If any of you are on Catster/Dogster those sites are having their life lines unplugged on Wed Aug 10th...sob. At least the petcretary has saved evfurrything she deemed neccesary. But how on earth will she know how to make birthday cards or other occasions? She will no longer be getting the notifications that let her know, and even worse, that was the source of most of her images to make those mementos. Louder sobs...

She copied the dates of some of them, so she at least can send a note to them per email or blogs or FB...but it just will not be the same...sigh...sob...

Speaking of pictures, we hope we haven't missed anyone's spawsial day... when we catch up this time we are just going to woo/purr on the newest ones, though we will read them all. We really need to get caught up!


Posted by Meezer's Mews & Terrieristical Woofs at 1:26 AM 20 comments: