Well, petcretary has been way busy and we missed some things this past week, the most notable being Rainbow Bridge Day...so we will honor our Angels here so the Sunday Selfie Blog Hop.

And we are thrilled and thankful that The Kitties Blue are going to be continuing this feature each week. Thanks, Miss Janet and your 'crew'!

Benji is eating much better, Hooray!

Not much change with pawppy, though he is going in to work half days right now. He starts Physio Therapy tomorrow.

Pipo has now decided that no litterbox pleases him anymore...so we are keeping the piddle pad company in business...sheesh! Not sure if he has some kitty dementia, or other issues, but for now we have a low box inside a crate that is well padded, and is easy to get into. However he pees on the waterproof mats that are all around that area...no matter if its cleaned up and a new mat put down. He even used the carpet a couple of times, EEUUWWWW!

Petcretary cannot seem to leave her issues of senior care at her job site, MOL!!

We have several Angel furs in our furmily...

There were two dogs from petcretary's 'growing up' years, and pawppy had three kitties before he married Petcretary. (We do not have any pics of his kitties, they were all tabbies, one long haired, and two short haired, two girls and a boy.) He also had many Scottie dogs and a couple of cats in his childhood years.

So starting with petcretary's dogs:

Blacky, he was a Cocker Spaniel Terrier mix, and he took care of the shop that our Opa had at night. Petcretary nickname for him was Blacky Bushka, he had quite a bushy tail! He got to be over 14 years old:) 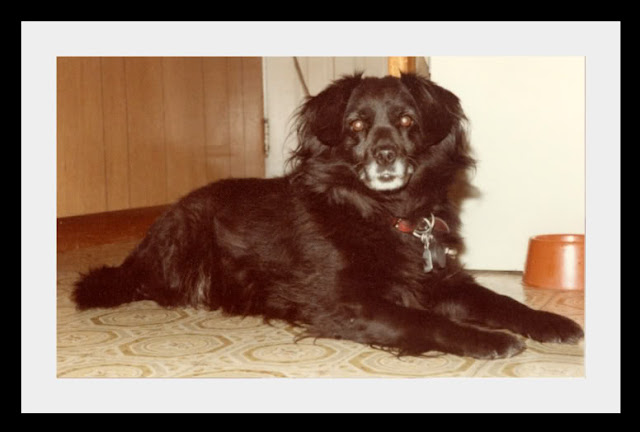 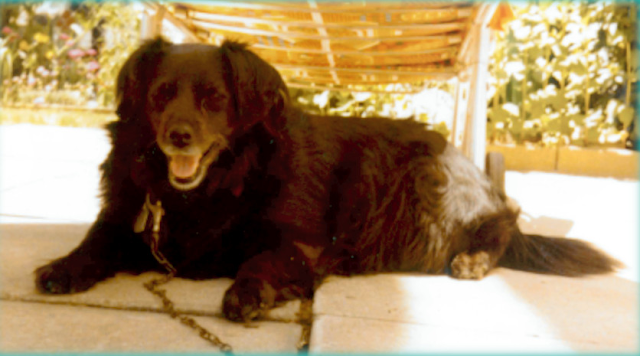 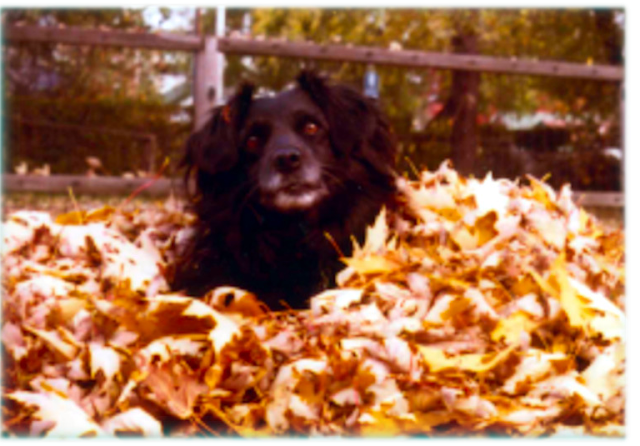 The next picture is of petcretary and her brother as youngsters with Blacky Bushka. 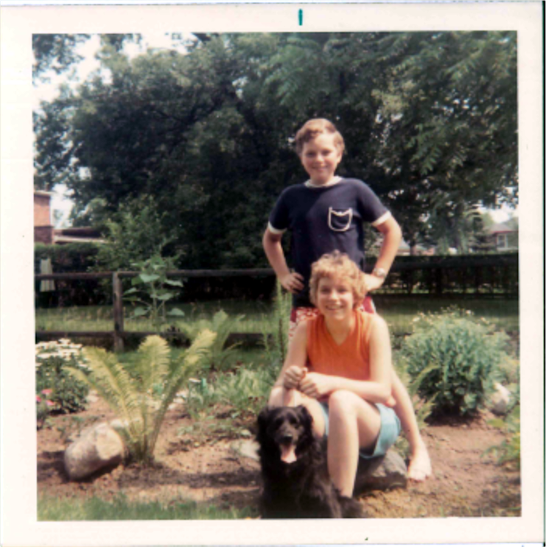 Then there was a second Blacky; nicknamed Blacky Monster, because he really could be at times, though you would not know that from his pics, BOL! He was a Lab BorderCollie mix...maybe that is why his behavior was over the top sometimes. He herded the squirrels in the yard, and our ankles too... 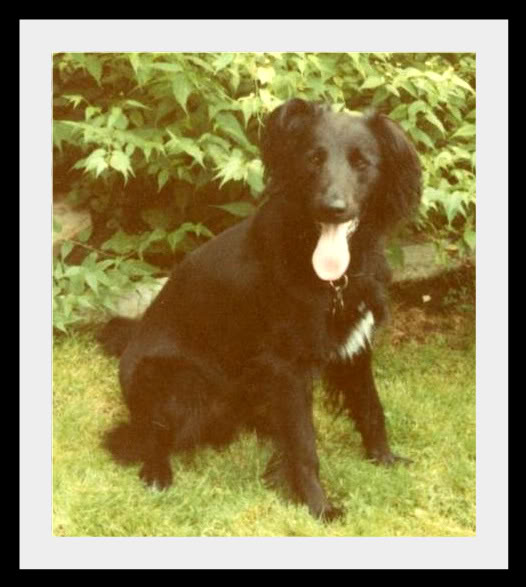 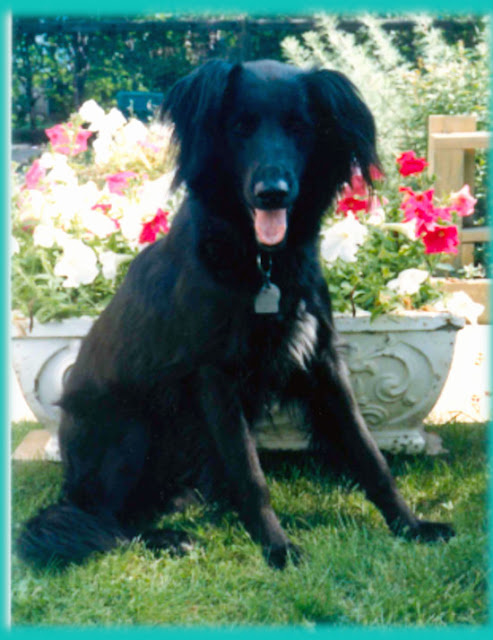 Then petcretary got a kitty! Shortly after they got married, a family had to rehome their pets due to the medical conditions of their newborn preemies that were coming home...anypaws, we got Groucho, at the age of seven, and he was a Meezer, the first of the six Meezers that have been with pawppy and petcretary. He lived till the ripe old age of 18 or 19, we were really never sure of his true age... 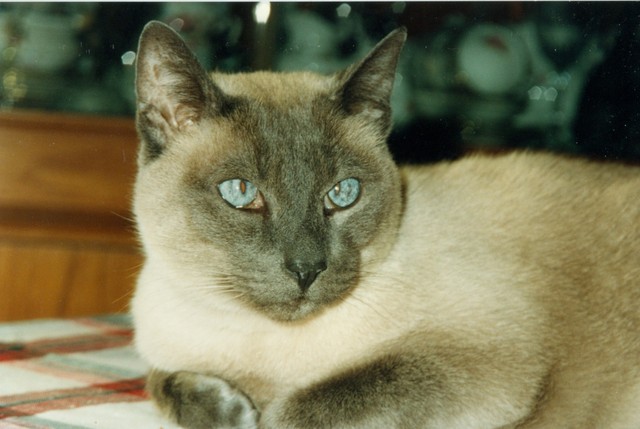 Then a kitten was added to our little family: Simba. 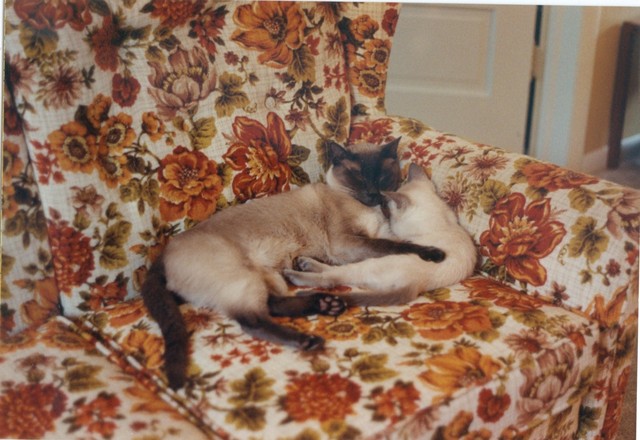 Groucho after some hisses, loved him and mentored him for seven years until one day Simba just curled up and passed away...he likely had a heartworm, cause he would get outside when the then toddlers here would open the door and he would run past them...to eat grass...and get mosquito bites...sigh...now all our furs get heartworm medicine all the year long. 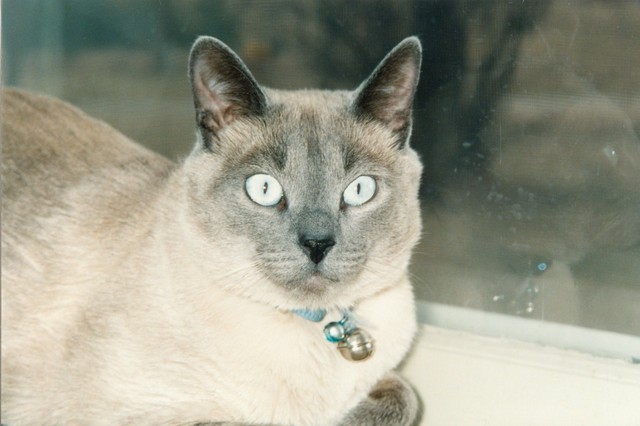 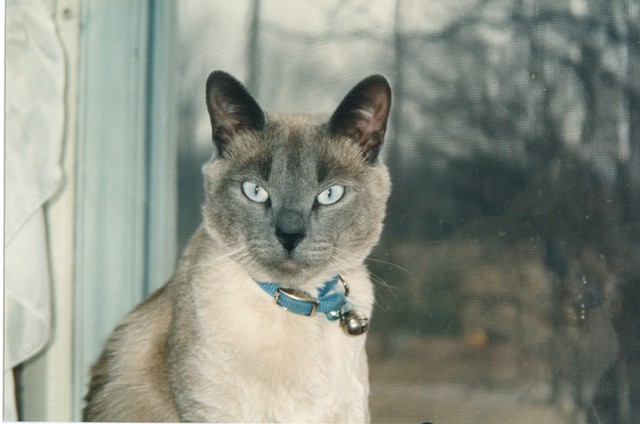 So then Suki came along...a diva kitty if there ever was one, MOL!Groucho taught her and loved her too... 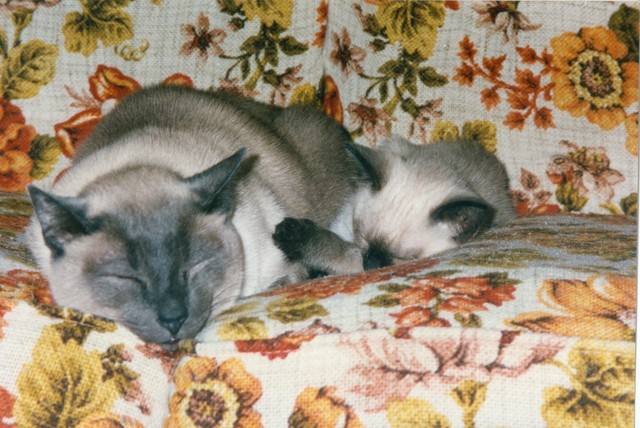 She developed seizures and had an inner ear problem so that she couldn't walk in a straight line, she would get attacked by the other two kitties and also the dog, so she was in a big cage when there were no peeps around to watch over her. Eventually the seizures became so bad that she was allowed to become an Angel, at the age of 11. 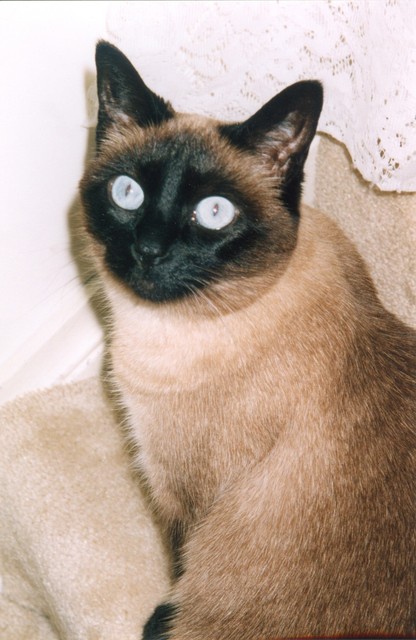 When Suki was about 6 months old, Toki came along...so now Groucho had 2 kittens to teach and love...Suki hated him and she hated petcretary for a while after that, too...yikes! She thought she should be the only kitty...even though she was there with Groucho...who can understand the minds of cats??! MOL!

Toki was a gem of a kitty, he was everyone's friend and learned lots of tricks. He was a fetch kitty, too. He visited the school where our sons went and stole their hearts. He would have made a great therapy cat:) 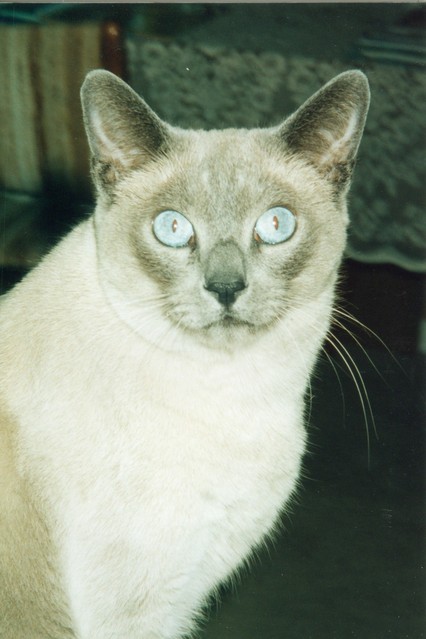 Toki loved it when MrJackFreckles came into our furmily...he immediately jumped into the bed with that wee puppy and laid on top of him...a nice warm cushion. They became fast friends! But more hate from Suki! 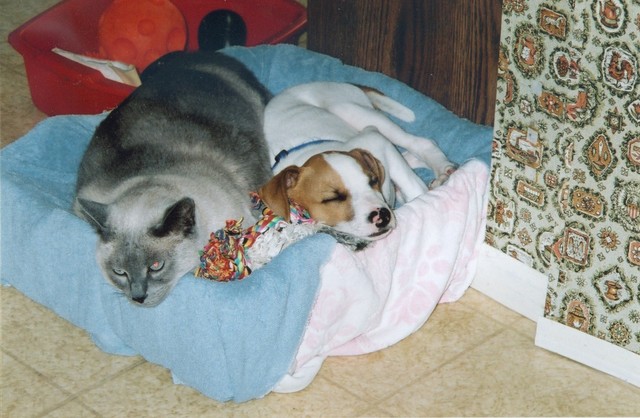 Toki got to be way too overweight, and at the tender age of seven he passed from complications of severe diabetes. MJF missed him immensely. 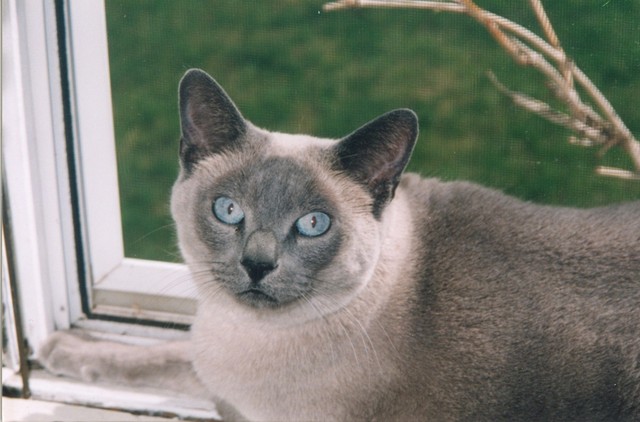 By then Groucho had passed; so one day on Valentine's Day of 2005, the kittens Pipo and Minko were introduced...Even though they were both the same age, about 8 weeks, (though from different families), Pipo has hated all dogs from the get go, and still doesn't like them, Minko was more tolerant and he got to be quite friendly with MJF, though not like Toki had been...they would not sleep in the same bed, MOL! They were mutual ear washers! Go figure:)

Then Minko got sick and petcretary had to hand feed him...she did that for three years, and on Father's Day of 2017 at the age of almost 13, he had a stroke. He was blind and paralyzed...so he too received his angel wings. 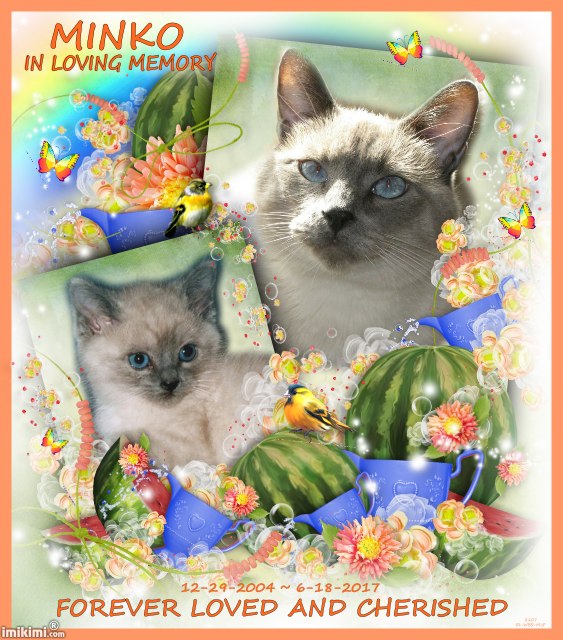 MrJackFreckles knew Toki, Suki and both Minko and Pipo...

He was officially the elder son's dog, but he lived with us all his life, even when son #1 moved out to his own apartment. MJF loved it when he would come over here to visit. 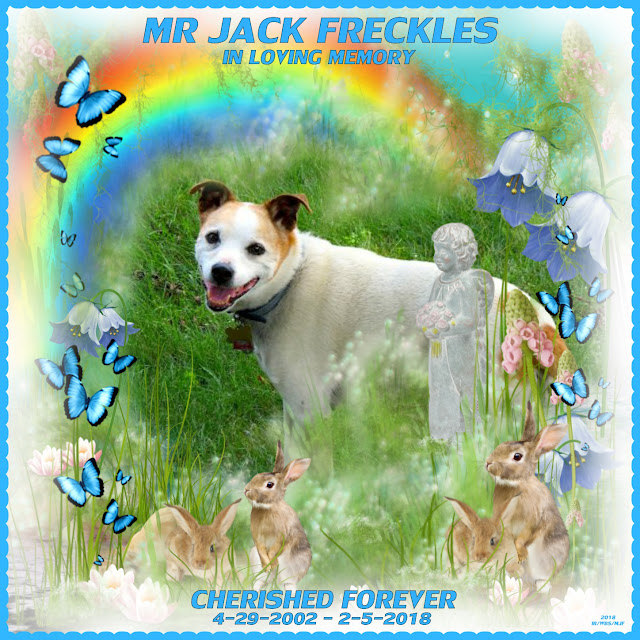 So those are our Angels...may they enjoy all the fun at the RB, with their friends and relatives.

Sunday Selfies; Dalton Had A Birthday

This past week, Dalton turned four! We had a small pawrty for him yesterday, since petcretary had to work on his birthday.

Last Tuesday, it was once again Tuesday Teaser Day, over at Teddy's blog...

Petcretary was one of four first commenters, and she was also the first right commenter! Whooppee!!

So she got these badges to commemorate the honor(s):

On Thursday at the same blog, it was poetry day. (Another weekly feature)

There are lots of other great poetical works there as well as Angel Sammy's, plus links to others...well worth a visit.

Thanks for all the fun at your blog, Teddy, and  Mom, Miss Pam!

You should visit there if you don't already, its a ton of fun, each day something new, fun, inspiring or yummy!

In other news around here...unfurbro-the-younger turned 28 yesterday...but he was out of town saying thank you to a service man, and goodbye as the friend was being deployed. Thanks so much to all the heroes that still abound in our lives. So we will celebrate at a later date.

Benji seems to have gotten better, but now he is back to the here a poo, there a poo business, and I don't want to eat my regular food...and so on. Either he relapsed or got reinfecged, or the med was not compoletelyt effective...off to check with the vet man once again...sigh...however he can still dig withg the best of the diggers around here.

We had the gas company here (Did I say intruders to be barked at...?), to replace the lines and the meters. Of course that meant digging large holes and trenches...sheesh, they should have asked Benji to help, BOL! After they refilled their efforts, and seeded the topsoil, well, lets just say there was a lot of red pepper and garlic powder used around here. And Benji thinks his new name is NO!

Pawppy had been back to work the first week of this month, and now since then he has been laid up with a bad back, there are two worn-out discs and he has severe pain, and cannot hardly move at times. He is to start PT as soon as they can arrange him to fit into the schedule, meanwhile he does recommended exercises at home, and is using a cane.

Always something...maybe if you all could please send some POTP, purrs and pawyers it would help some. (He does have plenty of time off banked up, so its not a problem that way, but the work things keep piling up their deadlines, etc...)

OK...time to visit all the other selfies this week!

Please add tons of purrs, POTP and pawyers for dear little Sawyer, who is having those nasty seizures again.

It's Dalton's Birthday!
He's four years old...well we think he is, he was assigned this day as 'the first day of the rest of his life', when he was rescued out of Texas during Hurricane Harvey. 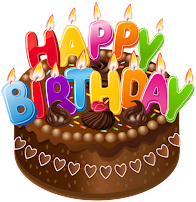 Petcretary is working today, and the next, so we won't have a pawrty till the weekend...but then its also unfurbro-the-younger's B'Day...go figure!

So we shall see when 'the event' happens. But t won't go unnoticed or bd forgotten! Earlier this week, *she* was picking up some heartworm meds at the vets and lo and behold Miss Tracy was there with a big boxer mix, a new rescue pup. Dalton was adopted through her rescue efforts. She was amazed at how good he looks now, all filled out and sleek. She giggled when she saw Benji, he is just such a lovable 'rag bag' of a Muttski!

She thinks perhaps Dalton will forever be scared of men...aka pawppy...since he's been with us nearly three years now. And then she thanked us for not giving up with him, she said some peeps would have returned him...sheesh. We love him, and we just let him be himself, scared and scarred and all. We love him and will forever! 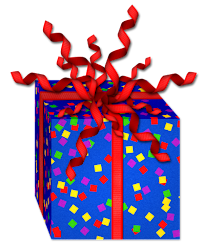 Posted by Meezer's Mews & Terrieristical Woofs at 3:54 AM 14 comments:

As The Dragons Fly Selfies

We have so many different dragonflies here, and a few of them asked to join with the Sunday Selfies, so that the hooligans & Pipo could have a holiday...LOL! 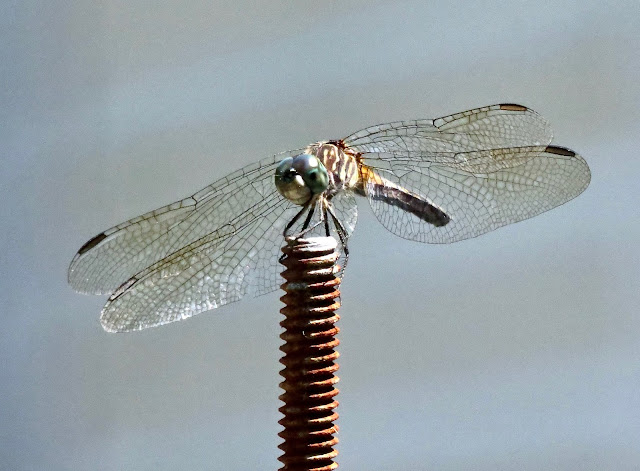 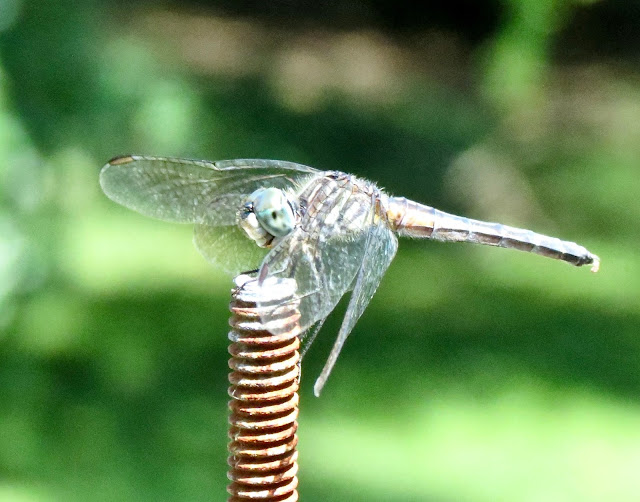 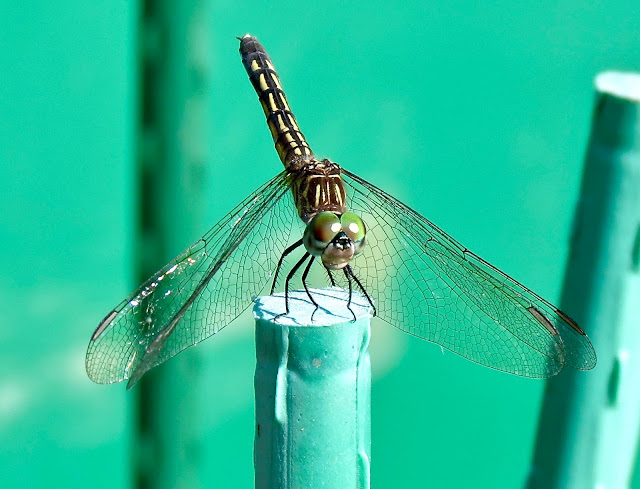 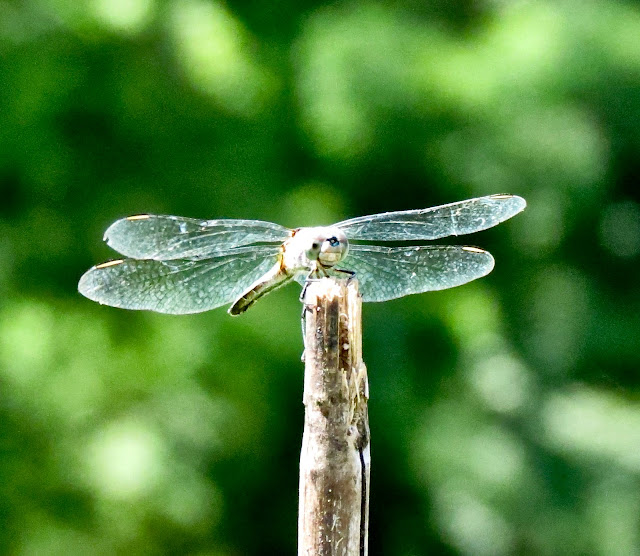 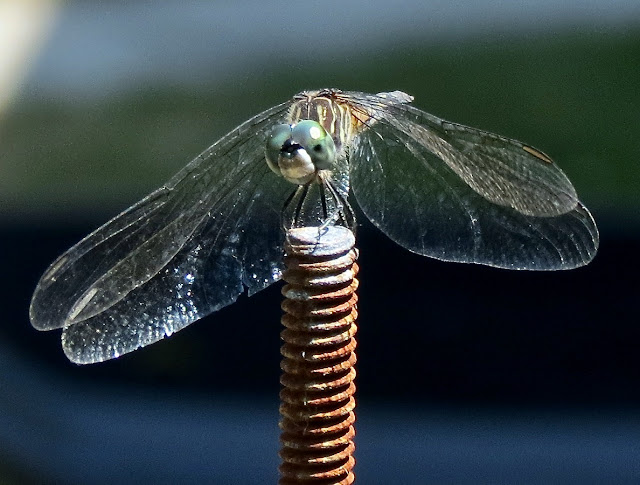 On Tuesday August 4th, it was Tuesday Teaser Day. Petcretary was one of the first commenters there...and then she was a first right guesser, too. However at the very same time that she placed her guess, so did TimmyTomcat, aka Dad Pete.

So it was a fun day for all, because that never happened before! We were tied!

Then this past Tuesday, petcretary sent in a picture that a friend had taken of a pretty waterfalls. It is in a conservation area north of where she used to live in Ontario, Canada. No one was able to guess where it was taken! She had them all stumped, LOL!!

This was the stumper image: