We made a card for him, too...cause,, well, petcretary doesn't make very many of those anymore, but since he was not able to have his own pawrty, we thought it would be nice to make hm one...to cheer him and his furmily up. It must be horrible to be in the situation they are having right now..and very scary. And to not have internet?? Sheesh, that is the pits. 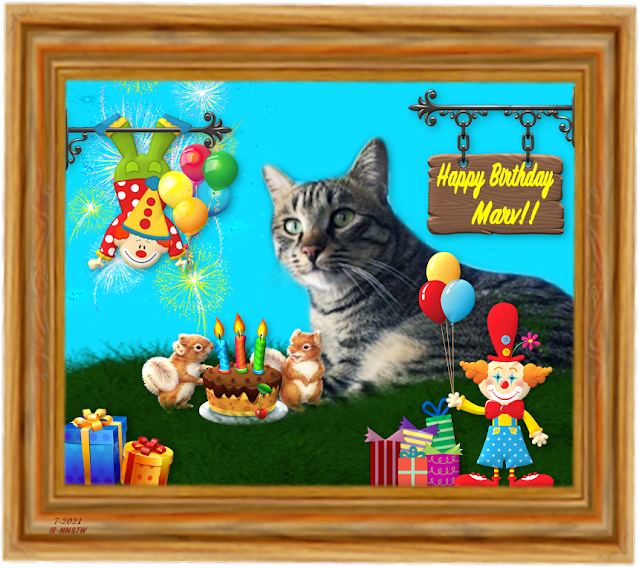 Lets pray for better weather conditions here and some good rain to help put out all those dangerous fires...the only flames we want to see right now are the candles on the cake.

This is Marv's blog, in case you wish to visit after they get things back in order there.

Posted by Meezer's Mews & Terrieristical Woofs at 3:33 AM 17 comments:

Happy 34th Anniversary To Petcretary and Pawppy! Yes it is the day to celebrate the fact that on July 25th, 1987, our pawrents got married! Wow, that is EONS ago!! We wish them all the best, and many many more years together in good health....so they can continue to care for us pups! (LOL!) (This picture is precious to petcretary as it wasn't made by the hired photographer, but by her Dad...)...and look at how skinny they were back then...LOL, LOL!!

Here they are today:

We are happy, too along with the Kitties Blue at The Cat On my Head, that Sawyer who ran off  was found and brought back safely to his home a few nights ago. HOORAY! You can read all about it here and here. 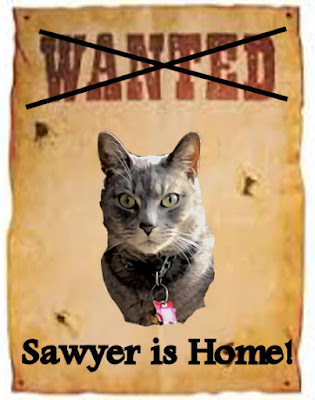 We continue to worry about all those affected by the scary fires in much of the west, both here in the USA, and in Canada. Not only are there fires, it is hot to the extreme and way too dry. 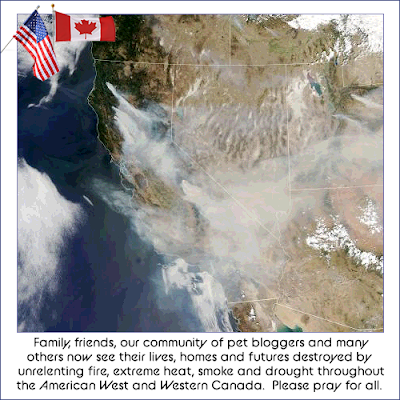 And over in Europe, a lot of countries are experiencing severe flooding due to WAY too much rain.

Yikes, the weather is angry for some reason...and its one of the very few things we have no control over, other than to have some fore-warnings...sheesh:(

Our own weather seems normal, at least for now, its summery hot and humid, but we expect that here in July. We have had enough rain, so that we really are not in the drought we were in earlier. The grass and weeds are growing...well like weeds! LOL! The worst troubles we are having right now is mosquitoes! Those little zoomers are HUNGRY! They are all over us, assaulting us as soon as you even just open the door to go out...so its like Bzzz...slap...bzzzz...slap! (Humans and furs alike, they want our blood...phooey!)

Last Tuesday, Petcretary got in the school front door very early, along with 4 others...a quintet of first commenters at the Tuesday Teaser!

She studied the teaser picture for a while and enlarged it...then she saw a flag hanging off a balcony...ta-dah! Then at least she knew the country...and after some more searching, she had the right answer...and it was the first right answer!! Ooohh! She's hot when she's hot!!

Anypaws, she got these badges for her efforts.

Petcretary made a couple of memorial mementos this past week... 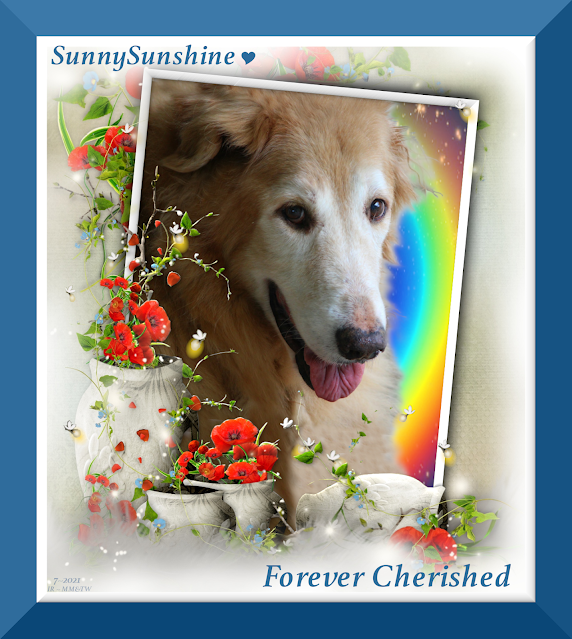 Then one of the residents where petcretary works saw some of the art that she makes for the angel furs...and she asked if Petcretary might make one of her recently passed away pup? Well?? Why not. This lady is on hospice care, and anything that will brighten her day, well, petcretary is all up for that. When this sweet lady got the pic in her email, she was so happy. She asked her daughter to get it printed and framed so she can hang it up in her room. Oh...Girly...I hope you made many fine memories in the 18 years of your little life, for your Mommy to cherish, each time she thinks of you.

Posted by Meezer's Mews & Terrieristical Woofs at 12:07 AM 27 comments:

Here we are...our feet are drying out after all the rain we had the past few days. Seems like we either have too much, or not enough. All the moisture made of high humidity...and mosquitoes! They swarm everyone as soon as they open the door to go out. Some even have tried to invade the inside of our dwelling. But they are taken care of as soon as we hear that typical high pitched buzzing... its like buzz-slap...buzz...buzz.slap!

Its hard to believe we are already halfway though July! How the time does fly! 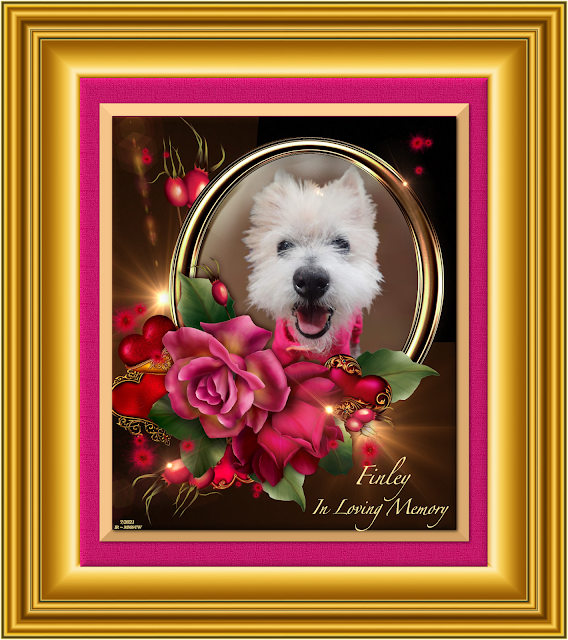 We also had to say good bye to Finley Rose, who flew away to the RB, to be with her many Angel-furmily members, and lots of Angel-furends as well.

Petcretary knew her and her whole furmily since 2009, long before we even thought of blogging...and we were in a amazing web site for dogs (and cats), called Dogster (and Catster),  we sure miss that fun site. (When it went away, in 2014, that's when we started our blog.)

While we made a post on July 15th to honor her, here are the memorial pics we put into that post. 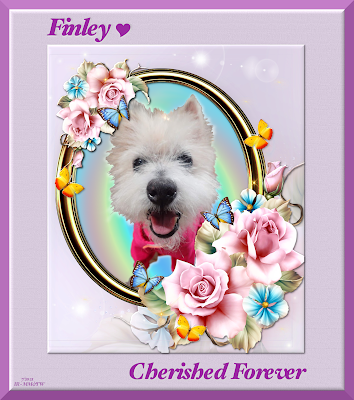 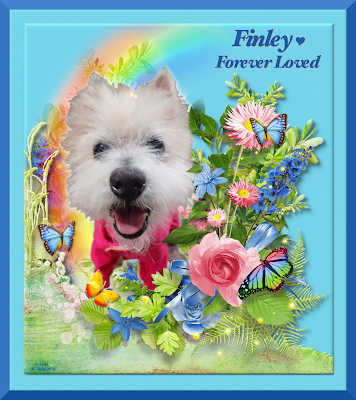 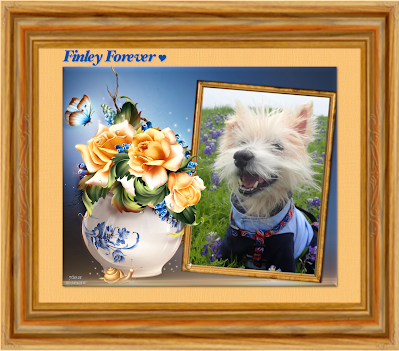 Finley, we will all miss you, may your memories be treasured forever in the hearts of all who knew and loved you so very much.

Sawyer is a member of The Kitties Blue who are the weekly hosts of The Sunday Selfies Blog Hop.

You can join the hop too, by clicking on the caption under their logo...and we thank them so much for always faithfully hosting this fun hop each week.

Posted by Meezer's Mews & Terrieristical Woofs at 3:10 AM 16 comments:

Our good longtime friend Finley has left her earthly furmily to join the other Angels of her family that have helped to prepare a place for her there, and they have welcomed her...and so have so many other Angel Friends, including MJF who knew her as long as petcretary has.

Our kitty Angels, all 6 of them were there too...since she loved her kitty furblings and so did ours!

Its always a sad day when we have to say goodbye to our fur babies, they never seem to have had enough time here on earth with us...but Miss Finley was not feeling too good of late, and she wanted to have relief from all her earthly ailments. Now she has good strong wings along with an eternally healthy new body to romp all over the fields of the RB...so now she can chase all the varmints and have lots of fun with the myriads of angel furs...

Rest well, Finley and soon you will feel good again.

Watch over us here upon earth and pay us visits with signs that we'll know it was you...

We made these mementos for your family... 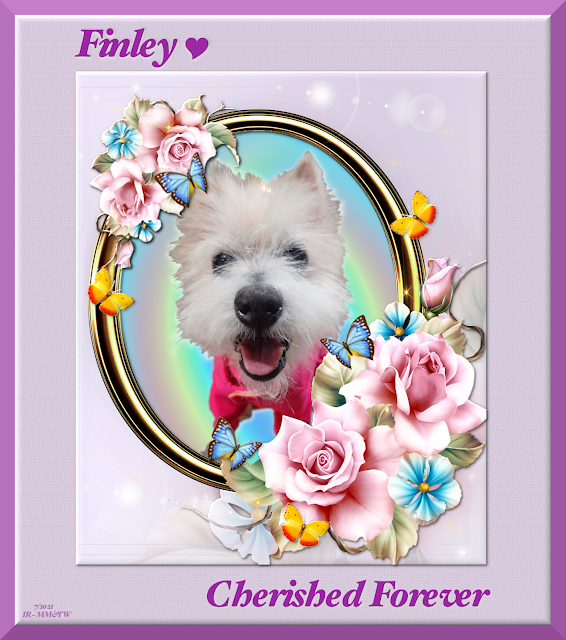 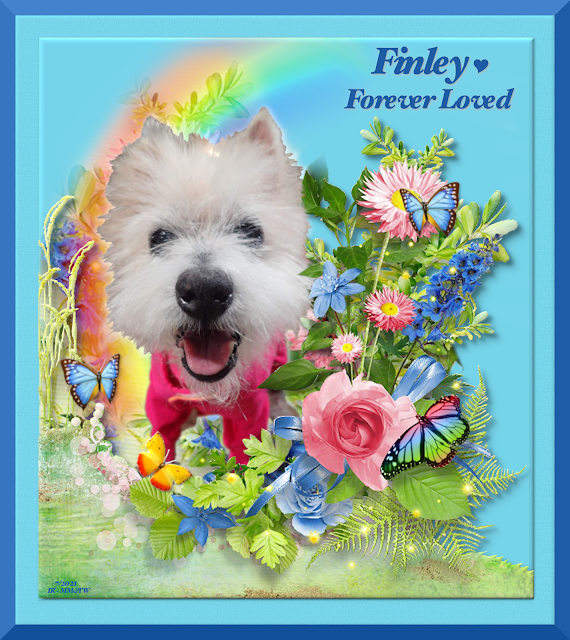 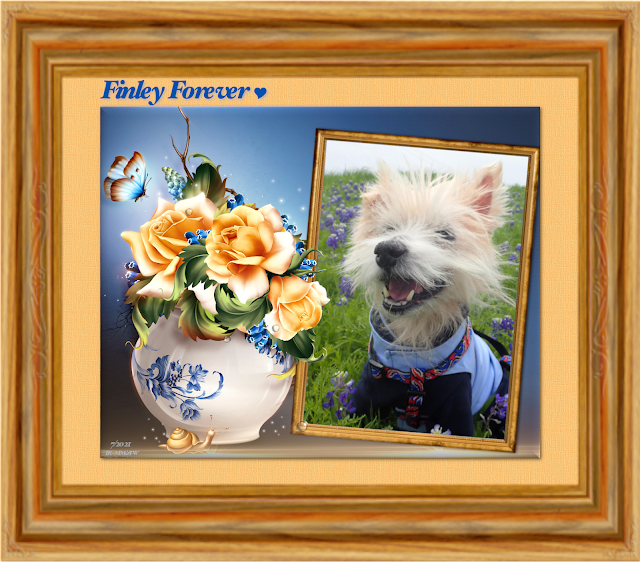 You can send your love messages to Finley's family by clicking here.

Once Again, Time For Sunday Selfies

Once Again, Its Time For Sunday Selfies!!

But wait, petcretary has not used her camera at all this week...we are not complaining, but she'll have to delve into the archives. She said Saturday was National Kitten day, so we'll let our Angel furblings, Pipo & Minko show off themselves as wee ones.OK?? OK, its settled then! 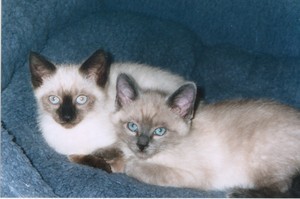 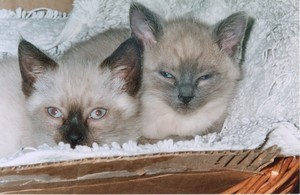 A couple of Tuesdays ago, petcretary and some fast fingered others got in the doors first at Teddy's Tuesday Teaser.

So she  got this badge for being early:

This was the image to tease us, sent in by Mr Frank...Thanks for a great pic, by the way!

Well, Petcretary had the first right guess for this Teaser!!

So she got this badge:

This past Tuesday she got in the door early again...she seems to be on a roll with getting there so early and being one of the first commenters:)

So here's the badge for that:

This Teaser pic fooled everyone, as no one 'got it'! And petcretary was the guest contributor of that teaser!! She loves to send in doozies, LOL!

Here are some more pics of that special place...that escarpment it LONG.and petcretary has been on it, in many spots...from Niagara Falls to Tobermory...not sure if she's been here herself, it was a pic from a friend:)

She got this badge for her guest contribution:

In-between all these teasers we had The Fourth of July...which we already had a post for. But during that holiday weekend, there was the annual Field of Flight and Balloon Festival. It had to be cancelled last year, due to covid...but was able to be held this year once again.

Here are a very few highlights from that event, held over five days, though our peeps did not go there for all of them, let alone for the full time of each day. Hah! Too hot, too crowded, etc. But they did enjoy what they saw when the *were* there. Oddly enough though they did fly, no hot air balloons were seen flying in the sky, not at the airport, and around the city either. Sometimes depending on the wind conditions they would fly over our home, but nope, nada..not this year...

They did have an evening where they tethered them and then lit them up: called a Balloonn Illume. Always fun to see. 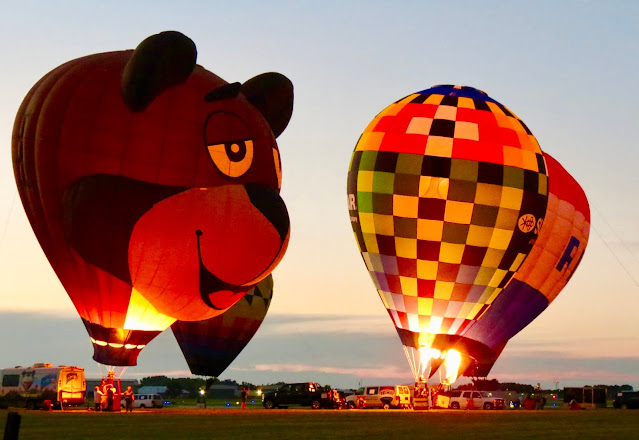 There was an airshow with many different airplanes and jets, the most notable being the F22 called The Raptor. 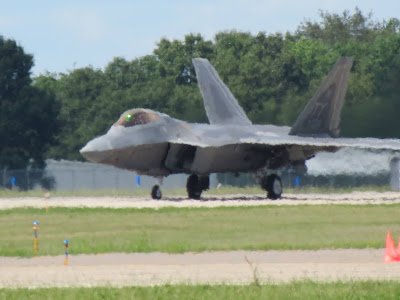 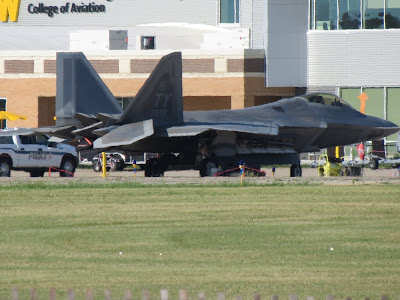 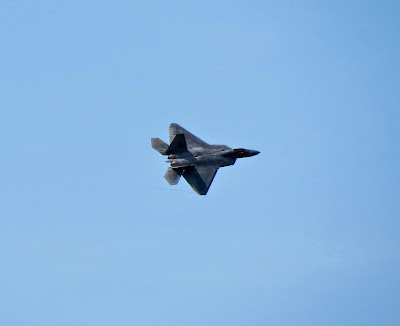 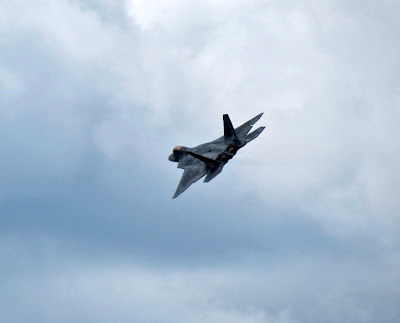 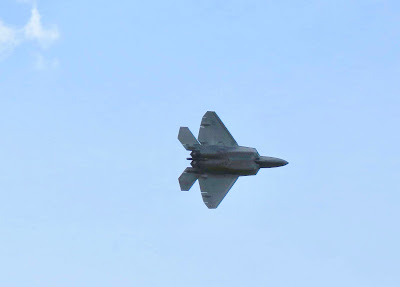 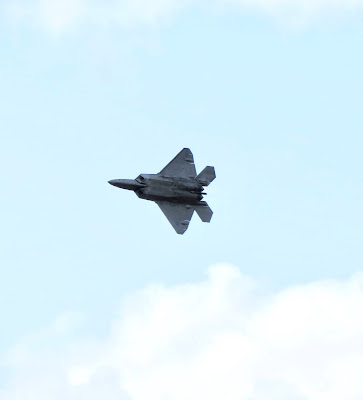 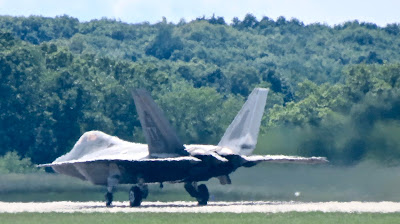 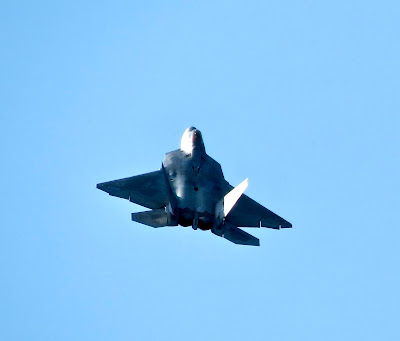 Its sure hard to get good pics of that jet...its so fast, anmd petcretary hasn't got the fanciest of cameras...its only a point and shoot camera...so she was happy she got any half decent images, LOL!

There was lots more going on there, but it would take hours for you to see them all...so...we'll just say it was great!

Of course there was ahuge fireworks display. Petcretary put her camera on a tripod, but mot of the pics she masde of them are not what she would call presentable...

But here are a few: 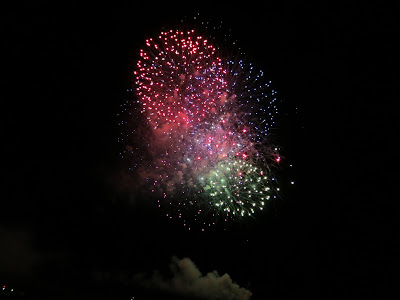 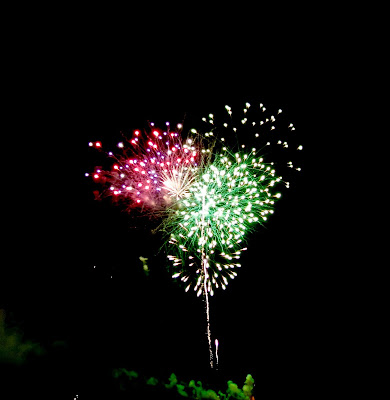 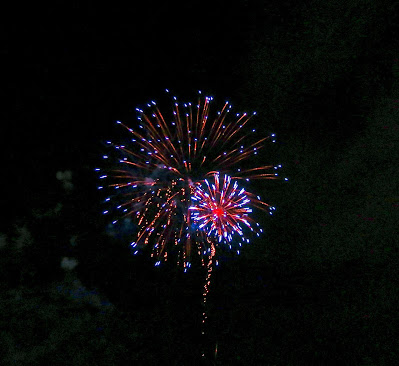 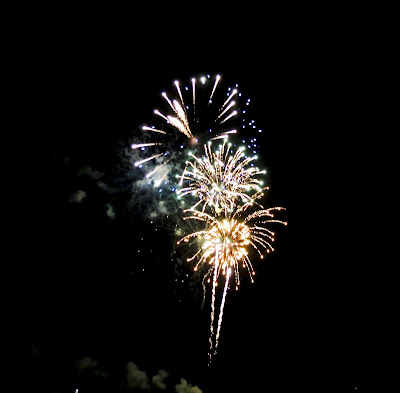 OK, now we are going to join up with the Kitties Blue for the selfies Blog Hop.

Sawyer still has NOT been found, this is so agonizing for them and all of Blogville as well.

Please add your purrs, pawyers and anything else you can think of to get Sawyer back to his home.

Posted by Meezer's Mews & Terrieristical Woofs at 1:31 AM 21 comments: