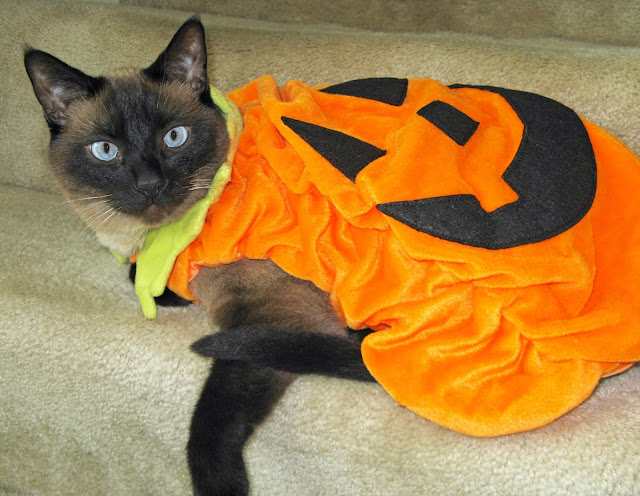 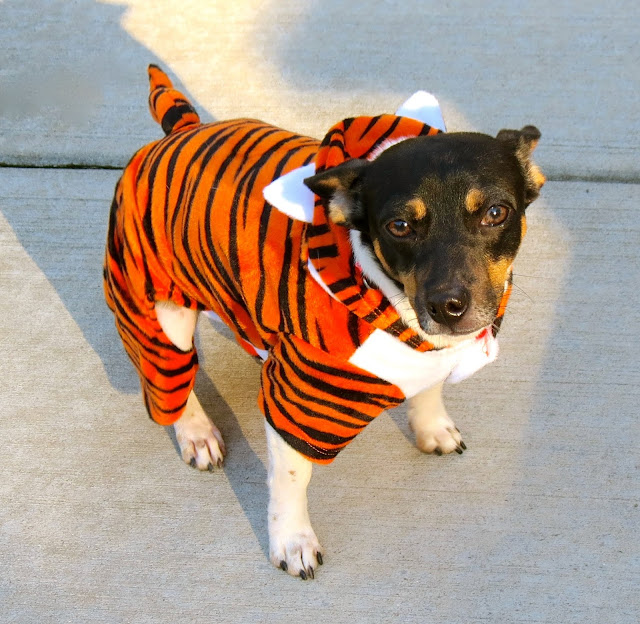 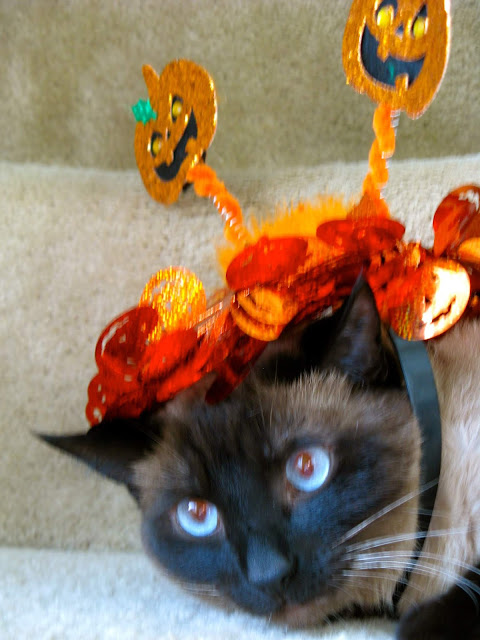 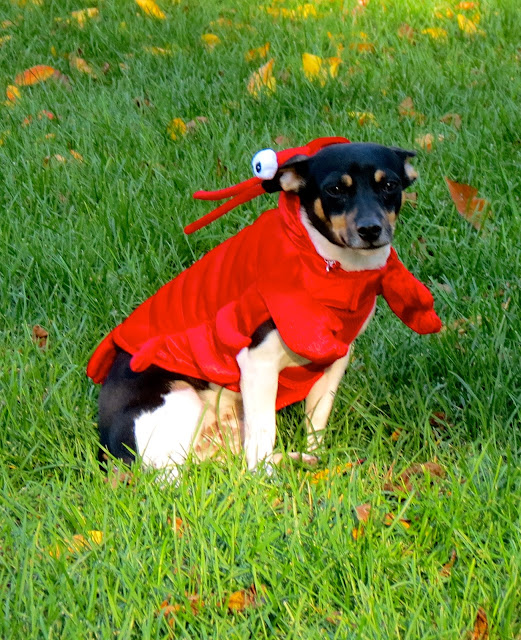 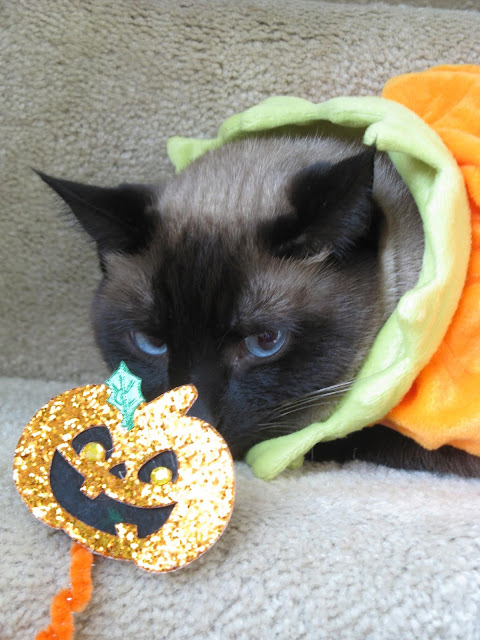 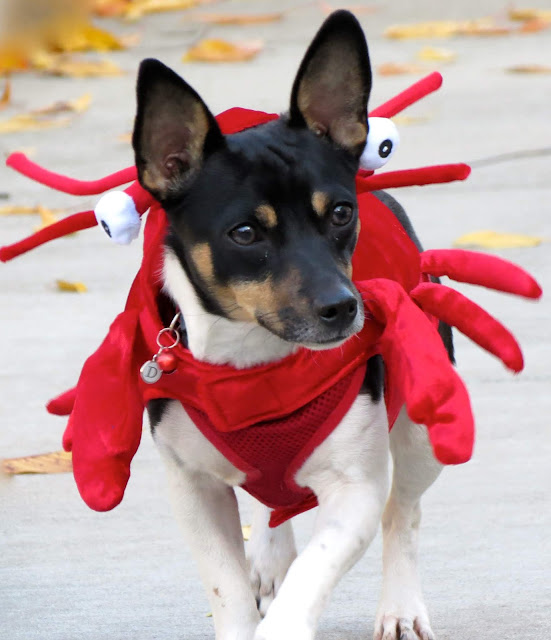 Posted by Meezer's Mews & Terrieristical Woofs at 2:55 AM 10 comments:

Not That Spooky Sunday Selfies

Well, we have to fire petcretary; at least we would if it was all about the camera thing...since she did not even use it this week. Excuses? Too busy, too cloudy, too rainy and all those lame ones we hear all the time...though it has been cloudy or rainy quite a lot.
Good thing we have some in the backup/archives to rely on. At least they don't give complaints/excuses.
Having done our grumbling, we did have some seasonal pictures made last week...we don't do spooky, just the fun cute things. We don't even get little trick or treaters at our den, so at least we won't worry about intruders and doorbell ringers. 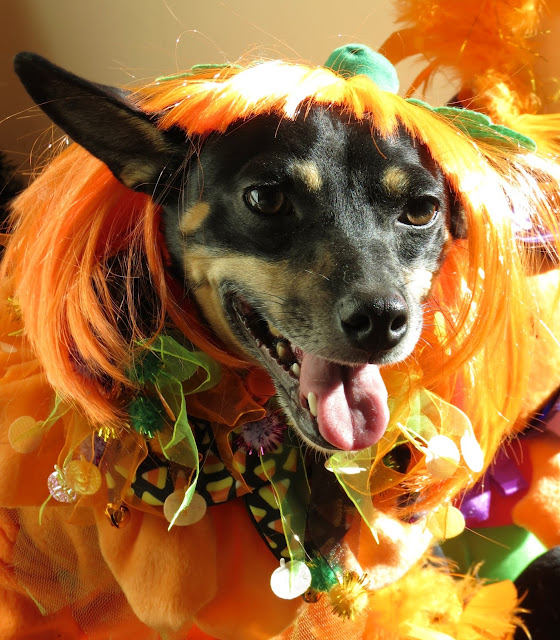 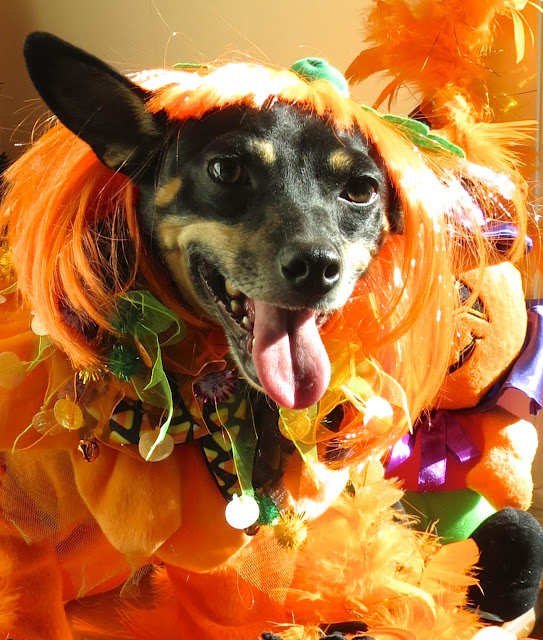 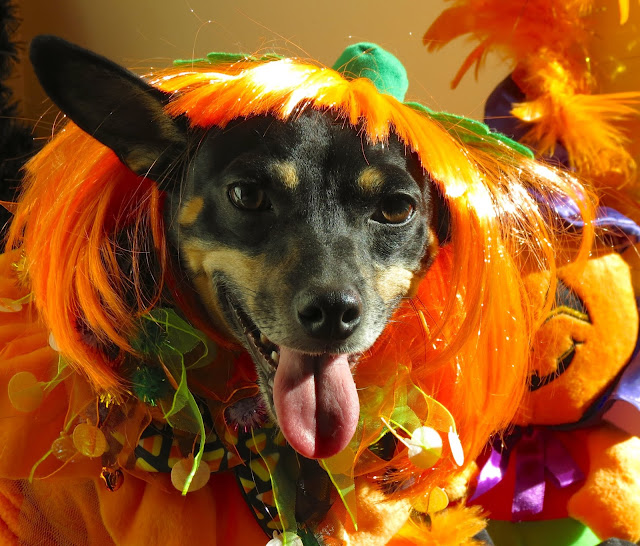 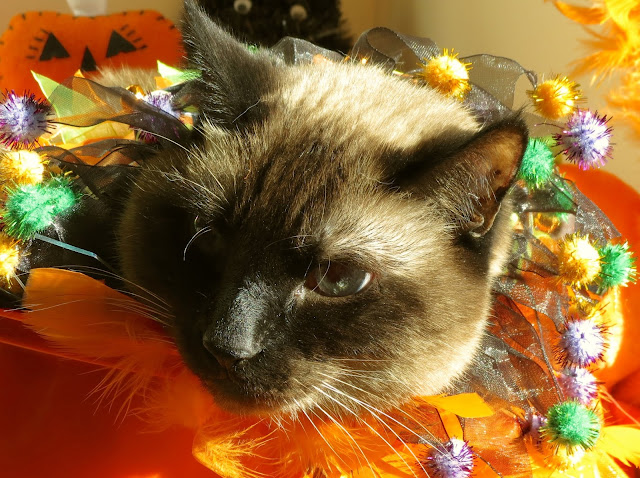 Petcretary was quick on the hunt this week, too...and therefore she won the Tuesday Teaser that Teddy challenges us with each week. Our Auntie who passed away back in Dec of 2017, had often gone to New Mexico, so petcretary took advantage of that...as she often talked about all the lovely scenery there. Nothing at all like Michigan, MOL/BOL! Even though she for sure was not early in her arrival there, no one else had come up with the right guess, so hooray for her,  she got this great badge:
We made a few cards, too:

Together Amber and Pandora shared a birthday post, though they had birthdays in different months, due to circumstances in their furmily they decided to have a joint pawrty! The more the merrier, right??!


We may not be here next week, Sunday; petcretary is going to visit our auntie, (her sister) and several of her cousins, they have decided to keep this annual gathering in November in honor of their late Auntie Arendina...so...we may not be here at all, or we may post a guest selfie in our stead, it depends on how much time petcretary can scramble together...

Posted by Meezer's Mews & Terrieristical Woofs at 3:45 AM 8 comments:

What a strange week, at least as far as the weather and its elements go. We had sunshine, thick clouds, nice balmy days, and then a heavy frost of 25F; thunderstorms, high winds, and sleet, and even hail. The hail happened during the MSU/UofM Football game, so here, being Wolverine fans, we said oh look hail! 'Hail to the victors!'...but the game had to be halted for way over an hour, due to the bad lightening. (And our team did win...Go Blue!)
So our patio planters and anything in the garden is now a frozen mushy mess. All the leaves from the black walnut tree fell off all at once onto the lawn, it looked like a green and brown blanket...and the catalpa tree in the back did the same. The Catalpa leaves looked like greenish leaf pancakes! Today there were lots of branches down, too from the high winds. Before the frost petcretary had to fix a planter that the wind had grabbed and knocked down. And petcretary was amazed because that has never happened before. Pawppy had to help to get it upright, its that heavy. So we can only barely imagine the wind's destructive forces from that nasty and awful Hurricane Micheal. Our thoughts and pawyers are with those affected.
Petcretary wanted to clean  up the yard and patio garden today, but the weather did not allow it...so well, that job will wait as it will not run away, MOL!
So instead of cleaning up the yard and garden, petcretary went to the pet store to buy some Dalton noms...and he went along! And well, there was another adoption event going on there. Dalton whined and pulled to see the furry wee ones...there were three puppies, and more than a few kitties, including a meezer mix. Petcretary chatted with the peeps for a bit, then pulled away to resist the strong urge to call pawppy to see if we could have another furry rescued one...but for us, this is not a good time for all kinds of reasons. So we will just stay with wee Dalton and good old Pipo:)
Later, both unfurbros came to watch the football game and enjoy a good meal afterwards. Petcretary fixed salmon, with roasted veggies, a salad and some homemade salsa. That salsa woke up the taste buds, MOL/BOL! She used tomatoes and peppers that she had harvested from the garden just before the frost, phew! Then they had berries with a Greek yogurt sauce for afterwards...since we don't eat heavy or traditional desserts like pie or cake anymore...Yummy! Dalton and Pipo both came to check out what those yummy aromas were...
So now we had to dig in the files, and we found some tocks to show you:


Posted by Meezer's Mews & Terrieristical Woofs at 1:00 AM 13 comments: