Our beloved memories of Angel Suki are about to be expunged from the interwebs forever. Sob. On July 12th, Catster and Dogster are slamming the door shut on the wonderfur communities we have so loved.
Well, we are going to try and preserve here in our blog, the memory of Angel Suki.
Hope we can get as much as possible saved.

Here is the info from her 'cover page'.

Pet-Peeves:
Dogs, strangers, vacuums, Toki in his first months with us

Favorite Nap Spot:
Anywhere the sun is shining on, or else a nice soft cat cushion next to Groucho

Skills:
Going through doors into forbidden areas.Chewing on strings, yarn and wool items.

Arrival Story:
After I unexpectedly lost a kitty, I started looking for a furbling for my 1 remaining (senior), cat. I answered an add. I drove way out in the country(nearly got lost), and there she was. The thing that sealed it was her birthday, same day/month as one of our boys...! She was a diva! And would not hesitate to give you her opinion, especially when we brought in another kitten! Much more when we adopted a DOG! She didn't want anything to do with me for days! She hissed at me! Almost too funny!

Bio:
At a very young age she inadvertently was stuck in a closet for 10 days, OMC! It was cool in there, and she may have found a mouse or two...we like to hope! So we began to take cat inventory after that...because she was a 'go through all doors kitty!' She survived that misadventure and even the vet found no ill effects at that time. However a few years later at about 5, she was diagnosed with CRF, and I always felt guilty that the 10 days without food or water was a contributing factor in her health. At 10 years old she had an episode of being incontinent, unaware of her surroundings and then seizures. The vet wasn't sure what her trouble was, but she seemed perfectly fine after that, except she was unable to walk straight. Like she had a stroke or something. Then we had a few weeks of good health. But then the seizures resumed, along with severe ataxia for several hours after each seizure, and not recognizing her humans or furblings. This went on for a few months...good days and a bad spell, but the times of good became shorter and shorter. The vet thought she had some type of severe inner ear disorder of unknown cause...She spent 5 days at the pet ICU, and then we had her back home to the see -saw stuff again. The other 2 cats would start beating up on her, and the dog was freaking out when she had a seizure. The meds she received only helped a tiny bit. So we made the sad decision to help her to the Bridge. She was 11 at that time. Amazingly, when I took her to the vet for this last trip, she was having a great day. She walked around that office giving everyone head bonks, purring and her tail was straight up while she strutted around. Even the vet was moved... But we both knew this was only temporary, so we decided to go ahead with it. In a way it was nice to do this when she was 'well' because it made a better memory than when she was suffering. She purred right up to her final breath... I still miss her and her Prima Donna cattitude!

Forums Motto:
I am the Princess of my castle.

My Kitty Hobby:
I was a Wool sucker. And eater. and chewer.Meowmy had to keep the home clear of all bits of yarn.Once she ate yarn that was about a foot long! At least we noticed it in time to make her vomit it up...just a big mess- no harm done...

I've Been On Catster Since:

Here are the pages from her diary:

In Memory Of Suki

November 27th 2015 2:24 pm Today is the day that Suki made her journey to the Heavenly Realms (In 2007), to receive her wings, after struggling with a debilitating illness that included having scary seizures.
Of the six kitties that have joined this furmily, she was the only girl-kitty, MOL!

I want to take this moment to say thank you too all who sent prezzies to Suki's page, So appawsiated , indeed.

And thanks too fur all those turkeys!! Mmmm! I see that meowmy didn't get to the confuser on time to send some fur us...sigh...but we love you all anyways! (( ♥ ))

Today Tundra and her furmily sent Suki this nice memento:

Meowmy is swamped with her work, chores and looking after Minko who needs a lot of spawsial attention since he is chronically ill with that scourge known as IBD. And our unfurs were home  to help with and celebrate Thanksgiving, yesterday. We had two more laps to sit on, MOL!
Both Pipo & Minko had to go to the vet today since they needed a booster. They of course were not too happy, MOL! And the vet added yet another med into the many that Minko already gets...UGH! Hope it helps:)

Suki remembers how meowmy was helping her evfur so much in the several months of her illness.

The things we do fur our fur-babies...

I and my furmily hope you all had a lovely Thanksgiving!
Now meowmy will be getting out all the Christmas decorations, that will give WBS some fun new toys, MOL!!

A Remembrance Of Suki

November 28th 2014 9:45 pm Suki was such a diva. Even after all these years of her being an angel, I think of her that way.
She sure had 'cattitude'! And a smacky paw that she had no hesitation to use, MOL!

Yesterday, November 27th, marked the day she became an angel, in 2007.
Manytoes and her most helpful crew sent this nice picture to help mark the day.

She even was a diva as a kitten, MOL! She knew that the table leg was not the scratching post...but, well, she was the princess and she was going to do what she was going to do. And her cuteness would get her out of trouble, or she would let us know it was her brofurs or 'not-me' who did it.

Thanks so much to all who sent us prezzies for her page, meowmy was too busy to stop and mew her thanks to all of you. Furgive us...
And thank mew also fur all the Thanksgiving prezzies...OMC, yarn was Suki's foible, she loved to chew and eat it. All the yarn on her page now would thrill her, MOL!! 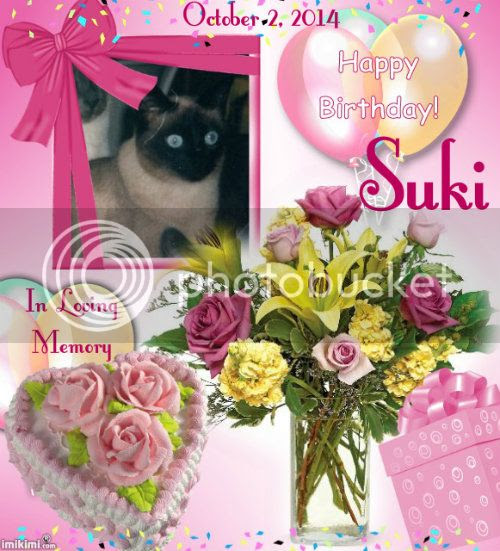 Posted by Meezer's Mews & Terrieristical Woofs at 2:15 AM