Well, it has been a crazy week for our family. Sad, stressful, anxiety filled and otherwise filled with uncertainty and turmoil.

Election stress, Pawppy's Surgery, Pawppy's return home, and Pipo's passing. Also this week would have been the week of fun and happiness for Petcretary, as she always reserved this week to travel to see her family in Canada. Well, Covid put a kabosh on that:(

Well, since we cannot change what is, we have to live with it all, and try to make the best of it.

All the hub-bub regarding Pawppy helped petcretary have things to occupy herself with, instead of falling apart over Pipo. Being a health care worker herself, she has learned over the years that one has to deal with the things of the moment and then later you can think about other things. Yes, the loss of Pipo is severe and it was sudden and she feels awful about that, on the verge of tears or even in tears...but the next day Pawppy had his surgery...she had a hard time keeping it together at times. SO much on her plate. Probably she would have anyways. LOL!

Then the peeps at the hospital deemed that Pawppy was able to go home a day earlier than originally planned. Yikes, she had nothing set up here yet. She was going to do that after visiting him that day...quick change of plans, some phone calls and a wild scramble to get the bed into the livingroom...cause stairs are out of the question right now...and to move all the kitty beds, litter pans and doggy gates out of the 'main drag' to prevent falls, etc. And a few other things...

So yes, Pawppy is home and today is better than his first day back, when he about fainted to the floor twice. 'She' was there to park a chair under him and push him into it before the worst thing(s) might occur...and he sat there for a while, till some food and coffee 'revived' him. Too many pain killers, likely a low blood sugar, and just the fact of getting up after about 12 hours in his bed...thankfully none of that today. At least unfurbro-the-elder is here, so he won't be alone, at least for several more days, until we can be sure he can get around safely. Thankfully Petcretary is off until the 16th...

Benji was SO happy to have Pawppy back!

Dalton seemed very anxious about this new Pawppy with that big walker thing with a swinging bag hanging from it, that holds his big reaching stick...he growls and barks at him...sheesh. That poor pup is so messed up...but he does come up to him when he sits down in the chair, looking for a chin scritch...

It is so quiet around here, with no Pipo. No kitty running into the kitchen when the yogurt container is opened to demand his lick of the spoon...no Pipo climbing on to the table to beg for a tidbit of whatever pawppy is eating...no Pipo in the sunpuddles...no Pipo to lead the way through the house, no litter pans to empty, no food to monitor  or feed...no meds to give, no throwups to clean up, no inappropriate pee-pees to clean up on the puppy pads, etc. No Pipo to purr loudly and knead pawppy's lap, or warm it up either. No kitty conversations between the peeps and Pipo, or the pups and Pipo...in other words, NO Pipo. Final.

Who would think that all those chores that are involved with a geriatric kitty would be so missed? SOB...SOB...

When we were getting the bed out into the living room, we found all kinds of lost kitty toys, mostly pom-poms and little fur batabout balls, sort of like pom-poms. And a crocheted toy that we had gotten from Miss Ellen from 15&Meowing. More tears were shed as 'she' tenderly gathered those up and placed them with some of his other things we are going to save...

We want to THANK ALL who sent emails, comments and other comforting thoughts our way. We appreciate them all, and hopefully will respond to them all....eventually. 'Blogville' is a very supportive community, and we love how in times of stress and grief, they all gather around to help; each, however small or large  gesture, is filled with love and concern.

OK, here are some of the card/memento/graphics we received in Pipo's honor.

Petcretary actually found some time to make a memorial memento for Angel Pipo...feel free to use it if you wish, he would be honored.

Here are we hooligans, we miss our kitty brofur...but we still have our good furends and furmily! 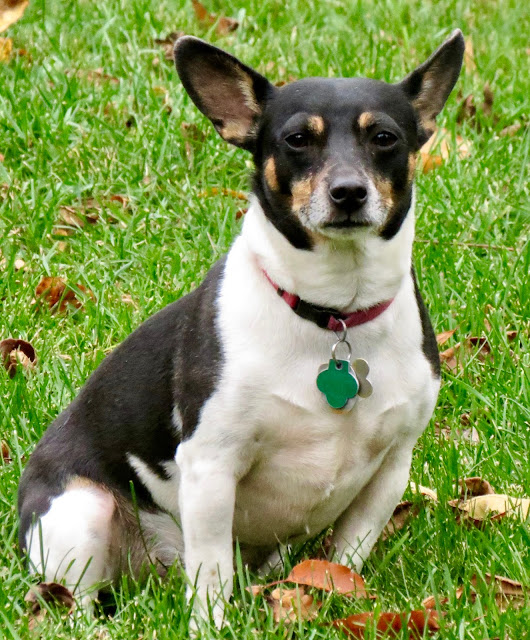 We made a get well card for Pawppy: 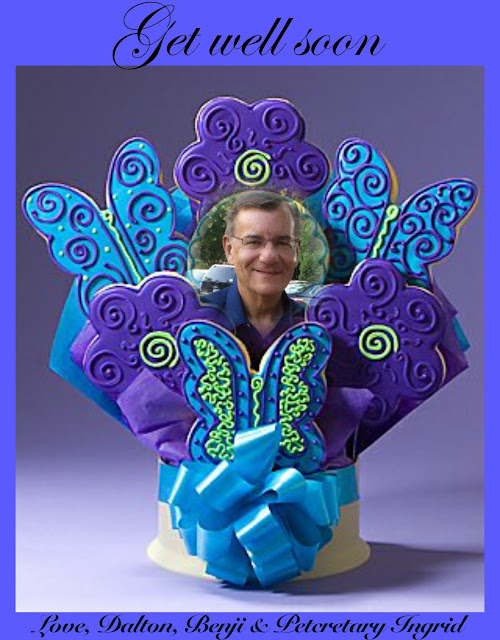 It was also a sad week in Blogville for another reason. Our good furend Summer, lost her sisfur, Boodie. (There were some other new Angels, too, though we did not know them...) So we asked petcretary if she could pawlease make a memento for Boodie as well, and she did! You know what?? She even made it before she made Pipo's.  Awww, that was nice of her, we think:)

Pipo & Minko, the kitties known in the past as WeBeesSiamese may begin to appear here in angelic flashbacks now and then and may comment from  Kitty Heaven as well, after Pipo gets his shiny new strong wings to be able to fly back and forth...Angel MJF may even appear, too:)

Us hooligans will try to keep the blog alive and well with our silly and funny antics and some nice pics too. Of course we will make new selfies...well most of the time!

Once again, thank you from the bottom of our human and puppy hearts for all your love and concern these past few days...and into the future as well. 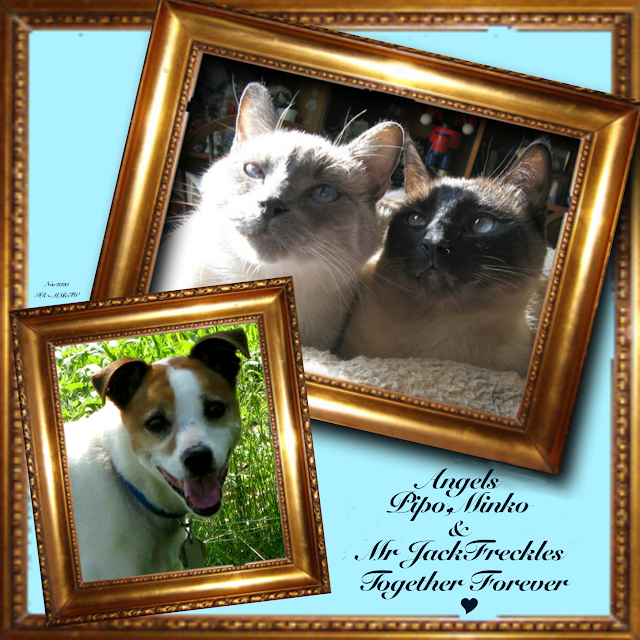