Not As Cold...But Still Winter!

Well, the deep freezer loosened its grip last week, for a couple of days. We were into the mid-upper 50'sF. All the snow vanished. And um...even though petcretary does clean up duty each day, under all that melted snow, she still found lots of 'buried treasures'. It filled up a whole bag, BOL!! Then on the 12th, we had freezing rain...followed by more coldness and 4 inches of snow. It was a slippery mess, and there were lots of drivers who could not get up hills on some city streets. So the police closed them until things could be remedied with salt and sand. The schools around here had a day off! Add that to the fact that most schools will have the 15th off for MLK Day, they got a super long weekend!
We had 3F last night, while not nearly as cold as some places and a lot warmer than last weekend, its still plenty cold and more so when you get out there and feel the wind.
At least we are all warm and cozy in our den, with warm soft nests to relax in. Would that all could have those pleasures to indulge in.

Well, it is Selfie Sunday...so we will show ourselves to you...but not outside in that cold, thank you furry much! 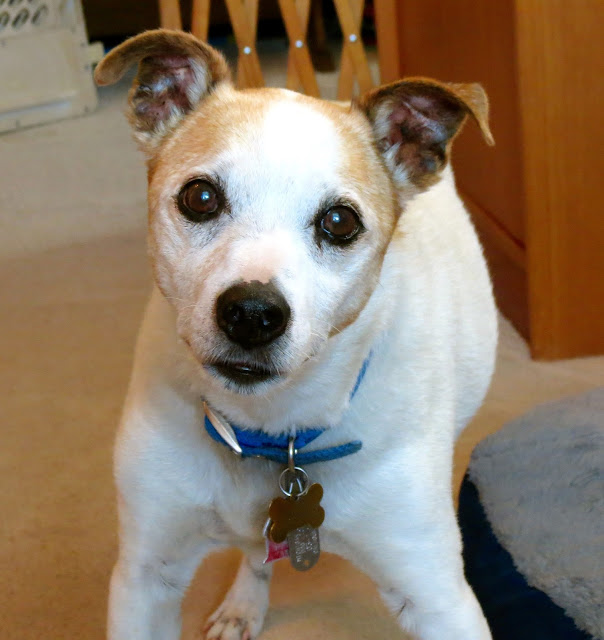 MrJackFreckles, while not completely off his food, is getting to hardly eating at all. Some days he eats half a day's serving, sometimes less, sometimes more... He'll go to his bowl, have a sniff or even pick up some tasty morsel, but then that is all...or he just walks away. Yesterday petcretary succumbed and added about 1/2 teaspoon of burger drippings (unseasoned, but cooked), and then he gobbled up about 3/4 cup of Stella & Chewy noms. Tried that again today, but he decided not...sigh...maybe he wanted a whole steak, BOL! It can't be left out for indiscriminate grazing because Dalton will vacuum it up before anyone has blinked! Sometimes he will eat if we give him Dalton's noms, Tee-hee. He eats grain free, but not the same as MJF. That raw/freeze dried food is hard on the pockets...so he does get a bit of it now and then, but not full servings like MJF.
But there is nothing amiss with the treat appetite! BOL! He would eat a whole boxful if given a chance...

MJF is spending more and more time sleeping the hours away. And sometimes running with Dalton, but its hard to do that in the cold and snow for an old-man-pup...esp with the balance issues he has...but he still seems to be enjoying himself, more or less. He comes into the kitchen for crunchy veggies, and barks at things he perceives as threats...which of course gets Dalton to add his opinions as well. It can be super noisy here sometimes, BOL!
Dalton was super naughty this past week...pawppy left him corralled in the kitchen area when he left for work. When petcretary came downstairs a bit later...he had found a loose part of our old (30years), kitchen flooring...and chewed and ripped it. There is a hole there now about 2x2. Pawppy saw it and said...hmmm, Dalton is a very expensive pup. Petcretary has never heard of any pup who did anything like that:(
So since we are not able to finance a new floor (which we actually need...), we will try to patch it up as best we can...and hope there are no more temptations like that for Dalton the dog from Hell.

Pipo just waits for a clear path through the dogs, and then he finds his place by the window to indulge in sunpuddles and burd TV. (Sorry Tabbies!) We sure do have a lot of hungry burds here of late! They go through sunflower seeds, peanuts, suet, mixed seeds and mealworms in great quantities. The colder and snowier it gets, the more they visit our burd buffet. Pipo chatters away at them, maybe he is inviting them to find our doggy doors to come in to the warm den and play with him:)
At night when petcretary sits at her desk, he will either come and sit on the chair behind her...to warm her back, presumably and get scritches that way, or he goes into the cubbyhole in the desk, (a converted shelf), then he paws at her from that vantage point until she reaches down and does the scritching ritual. He sure love him his scritches!! Or belly rubs! When he gets bored with all of that he will go and dig a pom-pom or a mousie out of his toybox and whap that around...or he plays 'trying to catch my tail'. Then he rolls and rolls, MOL!
He hisses Dalton who tries to entice him to play...but Dalton runs off ky-y-ing when Pipo whaps him...so that game is noisy but short lived. Dalton has not actively chased Pipo, nor has MJF, but Pipo is not friendly, though he does tolerate them to a certain degree. Maybe if a wee baby pup came in here he would maybe get more friendly, who knows! He does go up to sleeping dogs and sniff them until they move, then whoops he is gone!


Kitties Blue could use some purrs...wow, they have had their share of issues since we turned the calendar to 2018.