Today Dog-Guy said he wanted to have a blog post all about his doggy Cousin, Murphy. So we the WBS contingent of kitties in this blogging furmily agreed, cause we knew Murphy a bit too, he having visited here a few times.
So therefur this Sunday Selfie post is dedicated to our dear doggy Cousin, Murphy.

Sorry its kind of long...but the memories are so precious.

Murphy was a Cairn terrier...aka terrierist...he was born about a week before MrJackFreckles, hence not only were they cousins, they were kind of like twin brofurs from other mothers, BOL! (Almost like us kitties, who are only a few days apart too!)

MJF visited Murphy at his own den a few times, starting when they were both very small puppies of about two months old. Murphy came to visit here, too, starting from when he was about 3 or 4 months old. The last time they saw each other was here in Michigan, a few years ago.
Due to various circumstances they were not able to visit and have play dates after that, Murphy was not a good traveler, and MJF couldn't go to Murphy's den because after his Auntie got new floors they were very slippery and petcretary was scared he would fall and break a leg or worse. Esp now that he has this trouble with balance, and sometimes staggers very 'drunkedly'. MJF will not tolerate those kind of doggy slippers made to prevent such sliding on bare floors...sigh...

Anypaws, petcretary did see Murphy back in November 2016, when she was there visiting her own Aunt and her sister; our Auntie. He was definitely aging...poor pup. But he still perked up when he felt good.

On Jan 12, 2017, petcretary got this message, which speaks for itself:

"Sadly I have to tell you that I had to help Murphy to the Rainbow Bridge today.  Monday I took him to the vet for dental work...we had been there on Dec. 22nd for a torn off nail on his paw, and had discussed this.  I thought that this would help his appetite but the situation was far worse.  He had blood work done just prior to the surgery which revealed thrombocytopenia, and he could therefore not have the surgery.  Prednisone was started along with stomach stuff...but still no appetite.  This morning he could not pee...but could poop.  We went to the vet again and Dr. Ball suggested blood work again...but gave me little hope when he saw Murphy’s almost white gums and eyes.  The bloodwork confirmed that his red cells had dropped dramatically.  It also revealed that his kidney and liver functions were ‘crashing’ as the vet put it.  I received a call from the other vet we had seen and she said she was very sorry but there was nothing to be done, she also thought he had cancer somewhere.
Here at home he could barely stand and when I took him outside he was very lethargic.  Inside he could not find a comfortable spot....therefore the time had come.
Remember in November you said it seemed that he was depressed...perhaps this was already the beginning of the end. It had been a struggle to feed him...no matter what I tried, and he had lost weight too."
~~~
Rest in peace, dear little Murphy, you were a great cousin pup and I loved you. I will miss smelling you on petcretary's clothes after she visits your mommy's den, and when she comes here to visit s well.

Here are some pictorial memories of Murphy and some of us together as well. 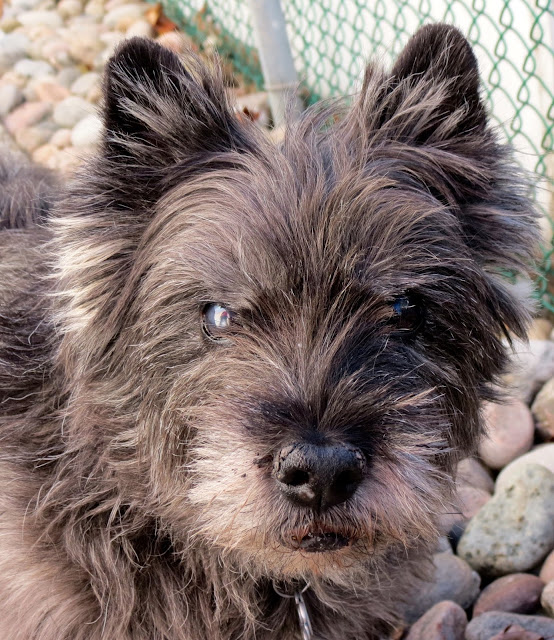 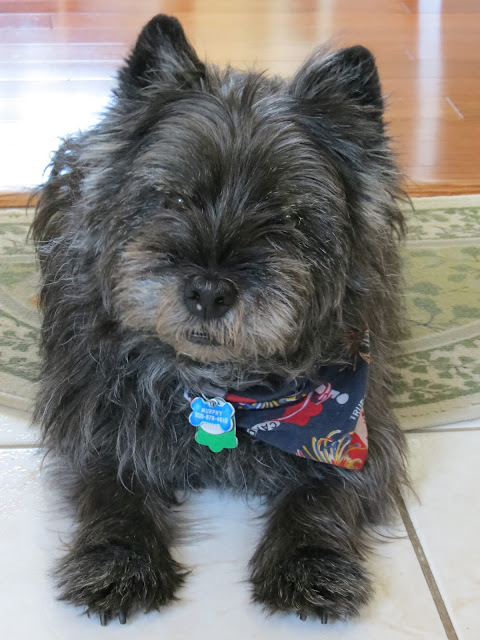 Thanks so much for staying her to see all my memories of my dear late cousin Murphy. We shared a lot of fun together over the years...once we even got to bark at each other on the phone, BOL!