I'm A Good Boy ~ Or: What To Do When Boredom Strikes

Yup, its been a week of indoor time to the max, rain, snow even some sleet and cold dank skies. Not the kind of conditions conducive to picture taking or going outside either. So I was bored. Really bored. Or spiteful that Petcretary took my enclosed den away?
The other day, when the only issue was a bit of snow...petcretary got up and when she came down she found this: 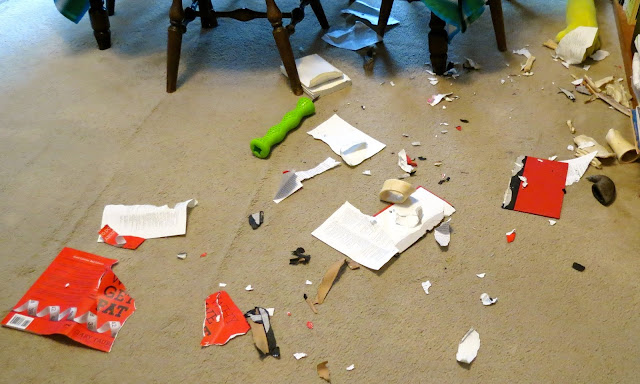 Sheesh, do you see that title, Petcretary? Get Fat...So I ate the Why part, BOL!! Cause we all know eating the yummy stuff that happens around the holidays is so yummy and delicious, that who can resist??!
But for some reason she was not too happy and I could see bad thoughts rumbling around in her head, because even though I spared her the part about feeling guilty for issues of food, etc, she said it was not what she needed after getting up late and now she had to clean that all up before she went to work. And that book was there long before I even came to this den!
Sheesh,  peeps are not evfur happy no matter how we try to help them...
And Pipo was living up to his name of Mr Peeps, one of the  nicknames he has had from the time of his kittenhood...Pipo-Beepo and Mr Peeps.

He watched from his peekaboo spot...and peeped over the chair top to watch what I was doing...and I am sure he was smirking to himself...

Well, you know what?
I got to go and see Santa Paws this Saturday. I was first and I told him I was a good pup, and I did not wee-wee on him either...or growl at that big red jolly lap...and I even wore my own Santa Paws hat. Pipo did not allow that on his own head...so that Pipo had no reason to purr anything about me into Santa Paws ear when he got to sit on that big warm soft lap. Why, he positively was cuddling with him, a stranger! Sheesh, I only cuddle like that with those whom I truly know and trust. Don't the peeps always say: Beware of strangers??!
(Petcretary says we cannot yet show you those pics, cause well, we have not even had Thanksgiving yet!)
So after that fracas of the book destruction and censoring I was so glad to find a minute of sunpuddle time:


We want to shout out a Happy Birthday to our Uncle, he is Pawppy's older brother. His special day is always around Thanksgiving, some years it even falls on that day; isn't that fun?!

We apologize for not visiting you all regularly again...so much to do, so little time...sigh...but we'll come by when we can. This week will really be one of hit and miss. Hope we don't miss too much. We love you all!
Here are the cards we have to show you this week...including one we forgot to post last time..