On A Road Trip Selfie Sunday ~ With Guests!

Hi furry furends and your peeps!
Today its time to have Sunday Selfies. But since we are also having some road trip fun, we are having our doggy cousins from Canada to do their selfie thing for us. So we have a vacation of sorts from the selfies, bwahahahaha!
One of petcretary's cousins has a new pup, a little gal that was rescued from the Dominican Republic. Now, if that isn't a road (and air) trip !!
Her name is Esperenza, which means hope, and she for sure has hope that now in her new forever home, she will have tons of love and all the comforts a doggy princess needs! She is a sweet little poodle mix. She already has been on her own road trips to visit Eddie!
Our Auntie (Petcretary's sister), came over here a couple of weeks ago...but she couldn't take Eddie with her. Dalton was disappointed, but on the other hand, he then didn't have to share her, BOL! Petcretary gave her a new toy to give Eddie when she got back, because he had destroyed the one she gave him before. It was supposed to be indestructible but he defied that and ripped it to shreds!
Well, here is some road trip history from petcretary:
Dalton has been on a road trip to visit Eddie; Angel MJF went there many times, and he also got to go to Washington, DC a few times to visit Pawppy's Mom, before she had to go to heaven. MJF even got to see the grounds of the Naval Academy and their big museum when he was barely three months old!
Petcretary did not learn how to drive until she was in her mid twenties! Wow! Nope, she had no need to drive, and it kind of scared her, she admits, LOL!
Her Dad tried to teach her, but then before she got the hang of it, she went on an airplane trip to a new job, over 1000 miles away. She lived right on the premises of that job, so also once again no need for a car or a driver's license. She did go on a lot of road trips while living there (Nova Scotia, Canada), since a lot of her friends had cars and they would go together. They once took a drive to New Brunswick, to get on the ferry to Prince Edward Island...in February in a blizzard. Yikes. Wouldn't even think of doing that kind of thing now! One time she even went on a bus tour all by herself! Otherwise she would not have ever seen the beautiful Cabot Trail...except she still didn't, cause the fog was so thick it was hard to see anything...sigh...
After she left that job, her and her sister took a road trip to visit where she had just left! Go figure. Petcretary had her driver's license by then, (Which has its own set of tales to tell about, LOL!) and even her own car...a brand new 1976 Chevette. (Which she called a Sh*tette...)
{Petcretary learned to drive in an American Motors Pacer.   She had to get a professional to teach her. She did some practicing in a friend's car. It had just been newly painted...and she was practicing parking in a shopping plaza lot. She was slowly going to the next spot,and suddenly a car backed out, tight into the newly painted fender of her friend's car. Oops. Then man in there said, 'well, when I looked a minute ago, there was no one coming'...sheesh!He must have been distracted. and he was elderly, so he was so worried we were going to call the police to report him...no we didn't...but he did give us the insurance # so my friend could get reimbursed for the next paint job...and no petcretary did not do any more practicing in that car to avert further disasters!}
Anyways, she learned to drive a standard transmission, so that she and her sister could take her sister's car on that trip...but it decided to need repairs and they had to go in petcretary's Chevette. It wasn't that bad, but trying to take an automatic 4 banger up some of those mountains was interesting, to say the least. Think: 'I think I can, I think I can!' She can't show you any pics of that trip, cause that was way before digital cameras and she has not scanned any of them...sigh...
After four years with that car, petcretary graduated herself to another...a standard transmission Mazda GLC. It was a fun car, and way peppier than the Chevette. However on a trip to see her peeps, she was in a bad accident and it was totaled, along with the other car involved. Two new cars, smashed to the junk yard. OMD/OMC! No one was badly injured, thankfully, just pride...and then petcretary got another car, just like the one she smashed...only a year newer.
That second car could have written a book about all the road trips it made! To Washington, DC...to visit her fiancee in Michigan, to Ottawa with family from Europe, and many other trips, long and short.
That car got all packed up to the hilt with petcretary's belongings, and made the trip back to our present dwelling, after her and pawppy got married....way way back in 1987! After 4 years of being there with a Michigan plate instead of the Ontario plate, it was too small for the expanded family of unfurs, as by then they had unfurbro-the-elder. So someone bought it that pawppy knew from his work. We wonder how many road trips that car made after it got a new owner??! 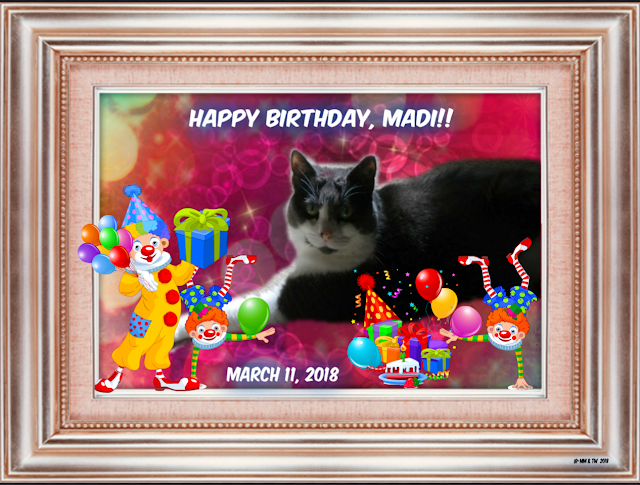 Oh, Madi! Your car on the roof reminded petcretary of the time she did something similar...she had her car balancing on the ridge between the driveway and the sidewalk...the front wheels were not touching, nor were the bottom ones...and it was balanced like a teeter-totter! Oops. The Triple A peeps had to come and use a winch to get her out of that pickle...right in her own property! MOL!!!

Rusty from Jan's Funny Farm, recently had a birthday too: 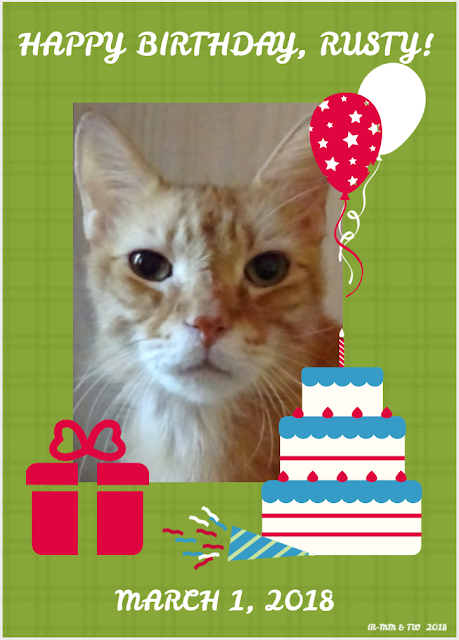 And Blogville had to say goodbye to Sei Chan. 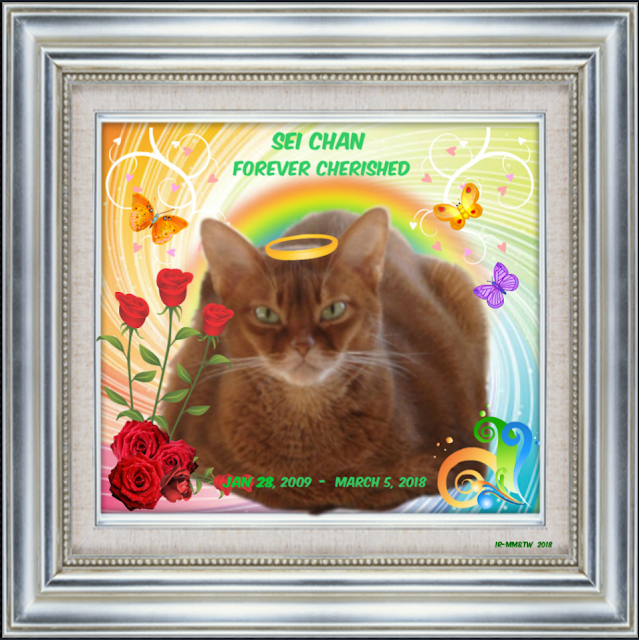